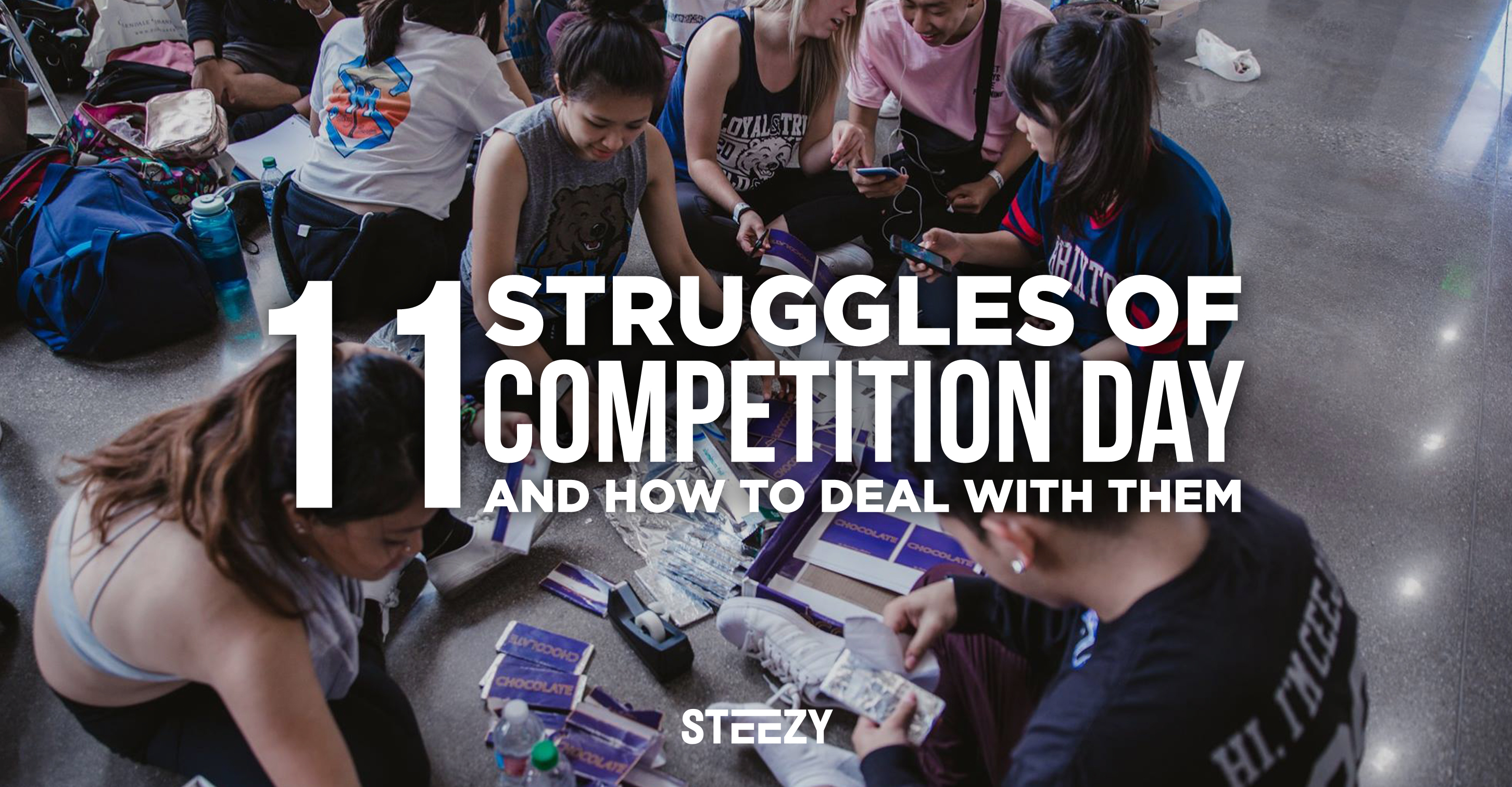 Best. Day. EVER! – Nothing could possibly go wrong...

Sike. The struggle on the day of a competition is so real, and no matter how hard you try, you just can't escape them.

Here are a few struggles that competition day can throw at you, and healthy ways to deal with them.

1. Your registration / tech time is before the sun rises

Maybe they draw team names out of a hat for fairness; maybe they set up registration times by the teams' distances from the venue; maybe you turned in your team's paperwork late.

All you know is that the last time you woke up this early was probably in high school, when you were forced to go to school to get that education thing.

Make sure your board members know better than to keep you up all night with last minute touches to the set.

A good night's rest is necessary!

Pack your things the night before, wake up on time.

DON'T BE THAT PERSON THAT HAS TO BE CALLED 42 TIMES BEFORE WAKING UP APOLOGETICALLY.

Make a Starbucks run, eat an apple, and become best friends with the concept of catnaps.

See Related Article: How To Take Care Of Your Body As A Dancer

Sure, nowadays cars have Bluetooth and AUX cords and can hold 8 CDs and have XM radios...

but a venue can't upgrade its technology and invest in an iPod jack and needs the CD to be readable in a certain way.

Carry around copies of your music like you're handing them out as free EPs.

Make sure you have extra copies on any and everything possible: CD, iPods, mp3 players, records, hitclips, cassette tapes.

These bad boys look fresh on your belt loop.

It's smart to do a run through with music, then walk through marking it, then if there's time do another full out run- tech is only 10 minutes and not 15?!

RUN TO YOUR SPOTS PEOPLE.

IS IT THIS ORANGE PIECE OF TAPE OR THIS YELLOW PIECE?!

See Related Article: 7 Easy Ways To Kill It On Stage

To make sure you have an efficient tech time, have a plan.

Whether it is to walk through formations first, perform full out first, or mark it with music, have a plan and make sure to practice it a few times before competition day.

That'll save you a ton of time and energy, as well as a lot of not looking unprofessional in front of other teams.

Make sure to stay quiet during tech and listen to whoever is directing you, and to actually make mental notes of where you're standing on stage.

See Related Article: How To Create Meaningful Blocking And Staging

4. The line up makes you feel down

You aren't in the position you want to be in, and it's annoying.

As much as we all may think the line up matters, there are logistics that go into the order of the show vary with each competition.

You'll never really know, and it won't really matter, because as long as you make a lasting impression on the judges, you could be going from the 1st half to 1st place.

See Related Article: How You Can Get Rid Of Your Stage Fright

5. There are only so many empty parking lots...

There are going to be a lot of teams, each wanting to get in a few hours of cleaning and run throughs.

You need a practice space, but all the levels and corners of this 7 story parking structure are taken.

Should you go on the roof? The forecast is only sunny with a high of 102 degrees.

Maybe we can dance battle other teams for their practice spots, very Step Up 2L The Streets-esque.

Look around for any open spaces and always respect other teams when you're passing through.

And if you see another team struggling to find a spot to practice at, offer them your space when you're done.

And if that's the case, don't get nervous about wasting valuable practice time.

Let your team be productive; give them an earlier lunch, have them start on their hair and make up.

6. "We're practicing from 10:30am to 6pm. Everyone can get ready until our call time at 6:12pm. That should be enough time to do hair, make up, put on your costume, go get some dinner, and stretch, right? Better meet in the hole at 6:10pm, just to be safe."

Deal With the Struggle...

The dance community has a lot of pretty girls with pretty (probably damaged) hair that needs to be straightened or curled and, unfortunately, battery operated curling irons don't suffice.

If you have time, come with your hair already done in the morning.

That way you can have 99 problems but your hair will not be one.

8. You fall victim to a fashion crime.

What?! Your color scheme of black with gold accents is NOT as original as you thought!? Shocker.

Paisley print and jerseys are TRENDY?! WHAT?!

See Related Article: 7 Things That Make Choosing A Costume For A Show A Pain In The @$$

Well you can't really do much about it once you're there.

It happens; people often times think they're outside the box and the community is small and more like-minded than you think, so ideas are bound to clash at some point!

9. If Yonce was at a competition, she would probably ask:

You met your runners in the morning at check in, got the house tour, and then they disappeared for the rest of the day.

Keep in good communication with your runners!

If you're a runner, keep tabs on where your team is!

Exchange numbers on the tour; textual communication is strongly advised.

You're in the middle of your team huddle, delivering a feelsy speech to your teammates in the hole when you hear...your opener...

Your opener that is a specially remixed version of that song from the 70's that you found and bookmarked on SoundCloud 2 years ago.

See Related Article: How To Use SoundCloud To Find Music As A Dancer

Much like the costume situation, at that point there isn't much that you can do.

All you CAN do is kill the choreo you guys have, and commend the other team on their song choice.

The MC just hyped up the audience with your introduction.

You're pumped and grunt out a, "LOVE YOU FAMS!" in the dark as you hit your pose.

The lights turn from dim to light.

One random, "WOOOOO" from a supportive alumni.

The MC comes back out, saying to give it up for your team once again, for there are technical difficulties.

The second wave of hype comes from the audience, more supportive this time because they feel bad that you're standing there, and your opening pose happens to be a hollow back.

If this happens, and trust me, it does happen, always stand still.

Not only does it show professionalism, but it also keeps you prepared for whenever the music might start, and you don't want to be scratching your head when the dramatic kill off at the very beginning starts.

The struggles are so real on competition day, and the best way to deal with them is to either prevent them from happening or to prepare yourself mentally!

Don't let unexpected problems turn down your mood; competitions are supposed to be fun, NOT stressful.

Have fun and kill it on stage, y'all!

See Related Article: As Dancers, Why Are We Addicted To Performing?

Are there any other struggles you can think of that we haven't included here? Leave a comment below to add to the list!This article was written by Christina Kim and originally published on October 27, 2014.