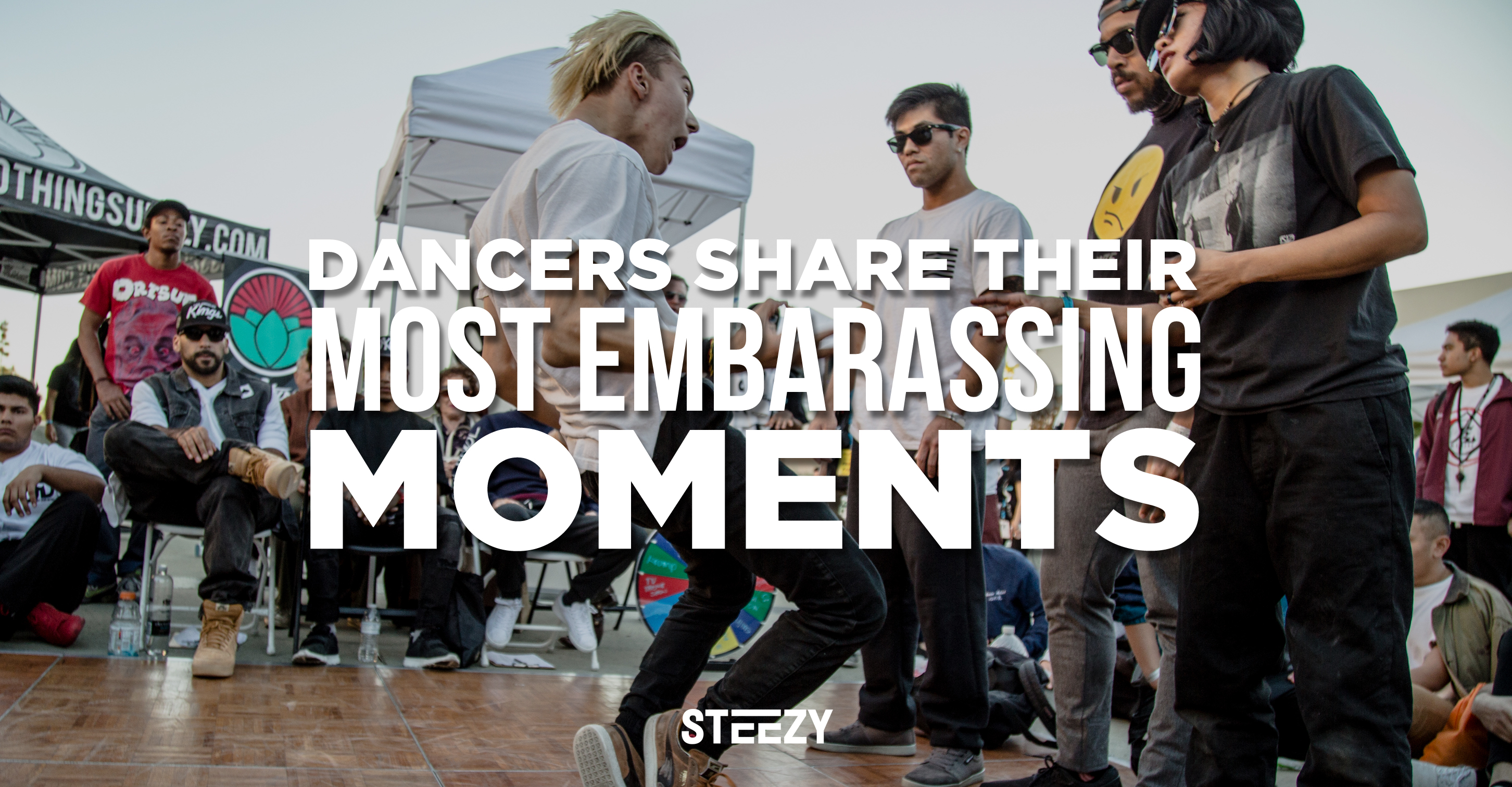 We asked some of #STEEZYNation what their most embarrassing experience was as a dancer. Read their stories and be glad it didn't happen to you! (unless... it did).

It was around 11 am during summer vacation and I thought my mom had left for work. I decided to try whacking for the first time and then mom caught me right when I was starting to get it. Sadly, she couldn't handle the amount of sass in the room...

When The Beat Drops

I was walking down a street once (earphones on) while listening to a really good song I just discovered and right at the climatic part of the song, I couldn't help do a hit with semi extended arms and I startled the two people walking towards me. So yeah...

Be Car-ful Where You Dance

I was at a stop light in my car and was going OFF to some song. Like 2 min later as I'm driving down the street I get a text asking "was that you dancing in a silver Toyota?"

I was dancing to some R&B music in my room and you know how some of those songs are lol. I was just practicing and I as I was getting into it, my mom walks in... I just froze and closed my eyes.

Sometimes, I'd practice some choreo while at work. Eventually some of my coworkers caught my tutting at my desk. One time, my supervisor noticed and asked me to freestyle in front of our manager.

I was practicing on the street with some friends, and one of the moves was a high roundabout kick, and I nearly took someone's head off. Turned out that someone was the choreographer from the class earlier, who not only called me out on the street for nearly kicking him in the face, but then pointed out that I was supposed to be using the other leg T_T.

I was performing with Prototypes and during one of the pieces I had a booger hanging from my nose which eventually fell onto my cheek and instead of being a professional, I stopped doing the choreo and picked my nose on stage and then when I realized what I was doing, I continued to dance after rubbing the booger onto my pants.

A Different Kind Of Sh*tking

Forgetting my entire solo when I was 8... and having my top fall down on stage every competition for the same dance...

farting while doing those dreaded sit-ups ;)

Once when I was in rehearsal, my nose was really runny because of allergies. When we ran the set there was a moment in opener where there was alot of level changes and momentum happening. Then out of nowhere a giant loogey flew from my nasal cavity, I saw it since my upper body was going down while it happened, and splat right on the floor. Then after the set someone slipped and was all like "why is the floor wet?" and I never confessed.

so one time I was dancing in my room to a really feelsy song (I forgot what song it was, I think it was Heaven Only Knows by Towkio) and I did this one move where I crunch on one foot and I lifted my knee up really high and kneed myself in the nose. my nose wouldn't stop bleeding for a good 20 minutes LOL.

I was having a heart to heart with the team and I was bawling my eyes out. During my speech I said "pussy" instead of pushing......#fobmoment

Whenever I say good job to someone at a competition and they haven't performed yet ????...

When they interviewed the team and they asked me how I felt. I replied with "Eggrolls."

ripping my pants... during dress rehearsal in front of family and friends.

Butt Did You Die

Falling on my butt on stage during performance

All Day & Night. Or Just Night.

During hell week I had to go to dance class at 8am after finishing practice at 7:30. I fell asleep on the floor during warm up.

preparing for a turn and punching my drama teacher in the stomach because I didn't see him standing behind me...

going to full out in a select group you trip and fall...

What Was The First Move?

Forgetting the steps in groups. Literally blacking out before the first step bwahaha

The Shoe Must Go On

When my shoe was about to fall off during the bboy piece at bridge jrs. so I had to mark the entire thing

Face Down, Ass Up

literally falling on my face in the middle of a solo...but of course I got right back up as if nothing happened.

a booger fell in my mouth during select group

Going full out on a piece then my glasses flew across the studio.

Farting during a set at rehearsals

the moment you realize they played the wrong mix, so you end in a standing fetal position

Ripped my pants during classes AAAND on stage during competition

What were some of your embarrassing moments as a dancer? Don't be shy, comment below and share with us!

One thing you won't be embarrassed about is how you do in class. Become a better dancer with STEEZY Studio today!