What You Don't Know About The Midwest Dance Community

What You Don't Know About The Midwest Dance Community 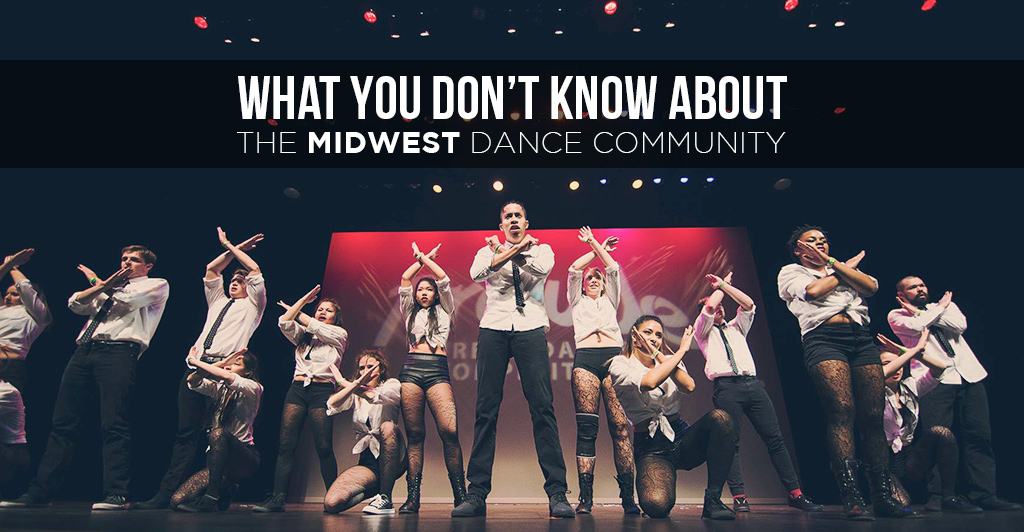 This past weekend, while swarms of people flooded the dry valley of Coachella (and our social media feeds for that matter), teams all over the Midwest braved the brisk air of Chicago to put their hearts on stage at Prelude Midwest. Each and every team’s enthusiasm for this competition made it feel as if there was nothing else this weekend but Prelude.

From the creative and animated roll-calls, to the inside joke interactions that stretched across the entire theater during house meeting, to the wholehearted support they showed for each team during the performances, it was obvious that no one wanted to be anywhere but right there with their dance community family. Teams drove out from Minnesota, Kentucky, and all over Illinois in order to congregate at the heart of the Midwest dance community for this competition.

We were fortunate enough to be a part of Prelude Midwest this weekend and finally had the pleasure of experiencing some warm, Midwest hospitality. After interviewing the three teams that placed and speaking to many members of this dance community, there is definitely one message they all would like to share to dancers everywhere: there is a dance community in the Midwest, and they are coming strong.

Amazing job to all of the teams that were there that night and a well deserved congratulations to the placing teams.

After the competition, we were given a chance to chat with the leadership members of these three teams in order to gain some insight into the Midwest dance community.

WHAT WAS THE MOST CHALLENGING PART ABOUT PUTTING TOGETHER THIS SET?

Each team generally just enjoyed the choreography aspect and danced naturally, finding their main struggles in the logistical and thematic aspects of set execution.

“Thinking outside the box. We did a Hogwarts theme and putting together the dance styles and the theme and then stitching it all together was the most challenging part. Individually, the pieces looked good. I believe in my team and the dancing was not a problem; it was just difficult to make sure that the theme was able to come through, but I do think we were able to accomplish that in the end.”

“Logistics were most challenging. The artistic aspect and choreography were pretty simple, but putting together costumes and props was our biggest obstacle.”

“Making sure that every single second of the set correlated back to the theme that we were trying to portray, not just throwing out movement. We were always thinking, ‘what’s the theme? What’s the message we want to put out to the audience'”

WHAT DO YOU WISH YOU COULD TELL YOUR PRE-SET PREPARATION SELVES/WHAT IS ONE THING YOU WISH YOU HAD DONE DIFFERENTLY?

Each team worked as hard as possible, dancing through the freezing cold weather of the Midwest – an impressive feat on its own, and it was evident in their performances. The Puzzle League though expressed their personal desires for more time in order to perfect their set, even though they were able to win first place either way.

“I don’t think there is anything we could have done differently. We’ve preached to the team on what we need to do – the execution was amazing, the crowd feedback was amazing, there was just a lot of tough competition. Everyone really deserved to be on that stage and everyone really put everything out there and laid their heart out.”

“I wouldn’t want to do anything differently. I think we came, did what we wanted to do, left it on the floor, and I would want to do it exactly the same way again.”

“Time management. We all lead lives outside of dance and it’s hard to juggle everything. We struggle with making sure everyone feels prepared ready to go on stage to do what we intended to do 100%. So I would probably have gone and given us more time and making sure we are prepped the way we needed to be.”

IS THERE A ROUTINE YOU GUYS HAVE ON COMPETITION DAY THAT YOU RELY ON?

Each team recognized the importance of their team’s overall morale and focused on making sure that they were all in sync and mentally prepared to perform, sending each other love and support on competition day.

“Spending quality time with each other. Getting each other in tune to make sure we all feel good before a competition. I think that is the most important part because getting the  moves is one thing, but being able to move as one unit, I think that solidifies your performance.”

“We do a roll call and then a prayer – just to get the team together. We like to stick together as much as possible to make sure we are vibing off one another and ready to take the stage together.”

“We actually have had a tradition since we first started – we would hold hands on stage and just say ‘I love you’ to each other. We changed it to do it now before we go on stage so we can focus more, but that’s always been a pre-competition reminder that we are in it together, we are a family, we cherish each other.”

HOW OFTEN DO YOU GUYS PRACTICE?

Braving difficulties of Midwest weather, jobs, school, and life, these teams do their best to practice as much as possible to feel good about their sets while still being mindful of people’s lives.

“Every Tuesdays and Sundays, but when it comes close to a competition or performance we start adding in extra days sporadically”

“Twice a week for about 2 hours but closer to competition time we extend it and add extra days to practicing till we feel comfortable doing our set.”

WHAT DO YOU THINK IS THE ONE THING YOU VALUE MOST AS A TEAM?

They are more than just teams; they are families and support one another to the best of their abilities.

“Our family aspect. We’ve grown both as a team and as a family and I think that’s what we value in this team most.”

“Being a family. We like to support everyone in what they want to do. We support our team members not just in dance, but as actors, singers, and more.”

HOW WOULD YOU DESCRIBE THE DANCE COMMUNITY IN CHICAGO?

The community in the Midwest was strong in its diversity and quality as well as strong in its communal support. After speaking to one of the logistical planners of Prelude Midwest, Jen Jovellanos, she expressed how difficult and almost impossible it was to create the lineup, as many of these dancers overlapped in teams, adding to the community’s sense of being intertwined.

“Very diverse. A lot of energy and different styles. Everyone is coming hard with everything from ticking to popping to breaking and more. I think we have everything here.”

“It’s a very very big community with extremely talented artists and dancers. At times it can be very supportive, and at times it can be very segregated, depending on whether it’s a competition or a showcase. For the most part the support is definitely there; for the most part people are friendly to each other. It’s also one of those underrated communities and we don’t get the recognition that the West Coast or East Coast gets but our community is just as large and just as talented.”

“For the most part, I would say we are pretty cohesive. At the end when we were giving out the awards, we were chanting C.O.D.A. League and I would say that our team is very close to the other teams. We are actually pretty intertwined – some of our members are actually on the other teams. It’s just nice to be able to feel like a community and support each other even though we are competing against each other. We are one big family.”

From numbers, to studio space, to even being completely satisfied with the Chicago dance community, each team expresses their own viewpoints.

“Being motivated to take class. Everyone here in Chicago is basically company minded the dancers are in a crew or has been in a crew at one point. A lot of the dancers, not all of them, but a lot of them do this as a hobby so it’s difficult to get them motivated to go out and take class. Everyone in LA is always taking class, but here in Chicago, it’s a lot more company minded.”

Y’all better recognize. Chicago and the Midwest are tearing it up!

“We can come hard too. We know they dominate the dance scene – and pretty much the entertainment scene in general – but a lot of people are sleeping on Chicago and we want them to know that we are coming strong as well.”

“That there is one. We auditioned for ABDC a few years back and we mentioned that there was a huge dance community here in the Midwest and they were like ‘Really? I didn’t think there would be.’ For people who have been dancing here their whole lives, it’s a pretty big slap to the face. Just to be known – that’s what I wish. There really is a big dance community here and it just sucks that people think there isn’t one.”

Thanks! You're In.
Oops! Something went wrong while submitting the form.
Beginner Guides

How To Twerk On The Floor

How To Twerk With Your Hands On Your Knees

How To Twerk In A Squat