14 Dance Movies For Your Current Mood

14 Dance Movies For Your Current Mood 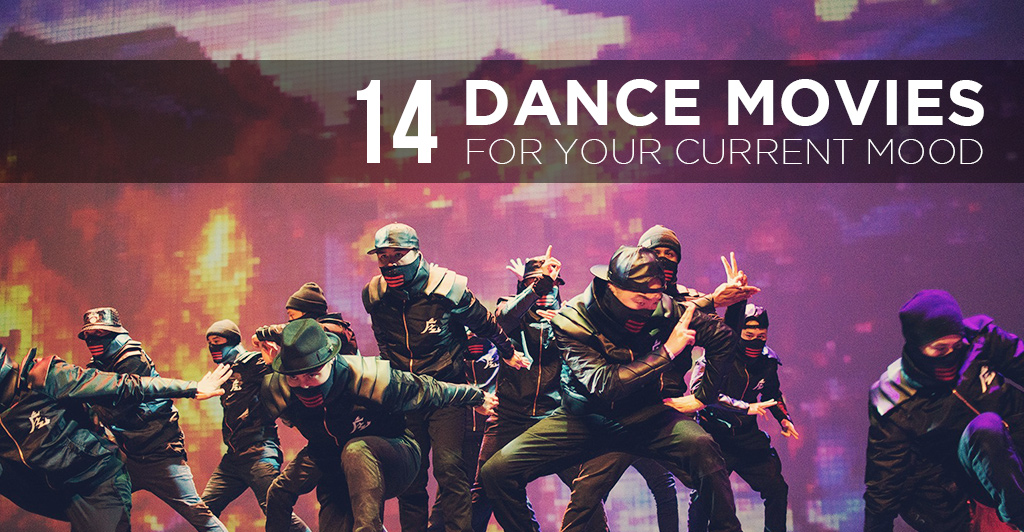 Going through a dance-slump? Wanna find inspiration, but don't know where to look? Rekindling your passion for dance might be as easy as watching a movie! With the stories, emotions, and of course, epic dance numbers in these films, all it takes is a few hours, a comfy couch, and some popcorn to make you wanna start grooving to the soundtrack~

Omarion? Marques Houston? Beyond being a lovely B2K tribute, You Got Served was a pioneer in the genre of street dance movies. It's about a crew from LA that battles at a warehouse / local club. Watch for a mix of street dancing, drug trade, a love story, and of course, talkin' MAD SMACK! "Y'all jus tmad, 'cause today, you suckas got served."

This'll get you in the right mode for your next battle.

Anyone who’s ever dared to be different could empathize with our protagonist: aspiring ballet star, 11-year-old Billy Elliot.

Set in England during the 1980's, young Billy navigates through the stereotypes surrounding male ballet dancers, particularly from his conservative father who is afraid that Billy will be seen as gay. But as Billy dedicates himself to his craft, people start to notice that he is genuinely talented and end up supporting him.

P.S. Check out the musical rendition of the movie with music by Elton John.

You're Feeling Like You've Hit A Wall With Blocking

Technically, it’s about cheerleading. But cheerleaders are movers too- and we can all appreciate good aesthetics. Coordinated hand claps to rhymed insults, cheering, cool stunts, CLEAN LINES, the FORMATIONS (in the competition routines) and upbeat music.. all sprinkled with some good ol' girly sass. Do you coach a high school hip hop team and need ideas? Or just wanna see pretty girls with huge egos hash it out on tumbling mats? This is the movie for you.

Spoiler alert! Halfway through the movie, Chris Brown ("Rooster") gets injured. Baby, no.

Based on the 2008 documentary, Planet B-Boy, Battle of the Year is about a competition in France (a real one, btw) where our crew of underdogs must battle it out with a group of Koreans. And lose. Darn Koreans. Kind of a modern day Beat Street, BOTY is riddled with social commentary that expands beyond the dance world.

Fun Fact: The battle scene can be seen in 3-D! V impressive.

Channing Tatum, as in, Nick Sparks' movies' leading star, heartthrob, eye candy, beautiful and hilarious Channing Tatum.. was actually the inspiration for this film! At age 18, he was working as a stripper at a club in Tampa, where the movie is set.

Appropriately, in Magic Mike, Tatum plays the role of the star stripper of a club at Xquisite Strip Club the plot itself is mediocre, but it does tie in some drugs, romance, and a peek into the (sometimes dangerous) lifestyle of a stripper. And half-naked Channybear shakin' his thang is enough of a selling point- it will make any girl want him, any dude wanna be him, or at least get ya on your bulk/cut grind.

Wild Style is a classic that encompasses the 4 elements of hip hop, capturing the beginning phases of the culture in a very raw way. It could be almost considered a documentary of hip hop in the South Bronx. With cameos by Fab 5 Freddy and Grandmaster Flash, they also feature writers and graffiti artists, DJs, MCs, B-Boys, Beatboxers- you name it!

Watch this. Become a maniac.

The movie is about a student in a fraternity that competes in stepping competitions. DJ has to prove himself as a dancer, while dealing with his brother's death, while chasing a girl...while attending college. What's your excuse?

A story about rebelling for a greater cause.. Dancing has literally been BANNED in the small town of Bomont, until Kevin Bacon starts a movement to bring back dancing and music to the lives of its people.

Dance and rock n' roll were seen as being dangerous- and it goes to show how unprogressive an entire community can become when they refuse to change their ways of thinking. Not only do they not evolve and grow, they don't get to enjoy the the things that make life worth living.

Honey Daniels teaches dance at a local community center, while aspiring to make it in the industry as a backup dancer. While choreographing for various artists, she refurbishes the old community center, making it a dance studio to keep kids off the streets and out of trouble.

Struggling to "make it" while staying grounded, and continuing to inspire her students, young Honey is the underdog with good intentions and big dreams that we all root for.

You're Feeling Like You Need To Improve On Footwork

This scene will have you appreciating tango, and really all ballroom dances that are the more "technical" or "traditional" roots of the partner work we do.

You're Feeling Like You Have A Dance Style Crisis

The running motif of this movie is diversity- the interracial relationship, people from different worlds and styles finding a common ground in their love for dance.

A preppy ballerina falls in love with a inner-city hip hop dancer. It's like a forbidden love story with a lot of great dancing mixed in.

The Step Up SERIESSSSSSSSSSS <- bunch of S's because I cannot emphasize the plural-ness of these films enough. With a collection of 5 with the 6th in the works, each of these movies has a unique plot with a different cast. So if you ever feel like dance is getting monotonous or boring. Think about the producers of these films. Yeah.

Bonus: You're Feeling The Travel Bug

Which of these films are your favorite? Share your favorites with us by leaving a comment below!Alternatively, if you're really feeling like you're in a dance slump that movies can't fix, check out some counter-intuitive tips on how to overcome that feeling here!