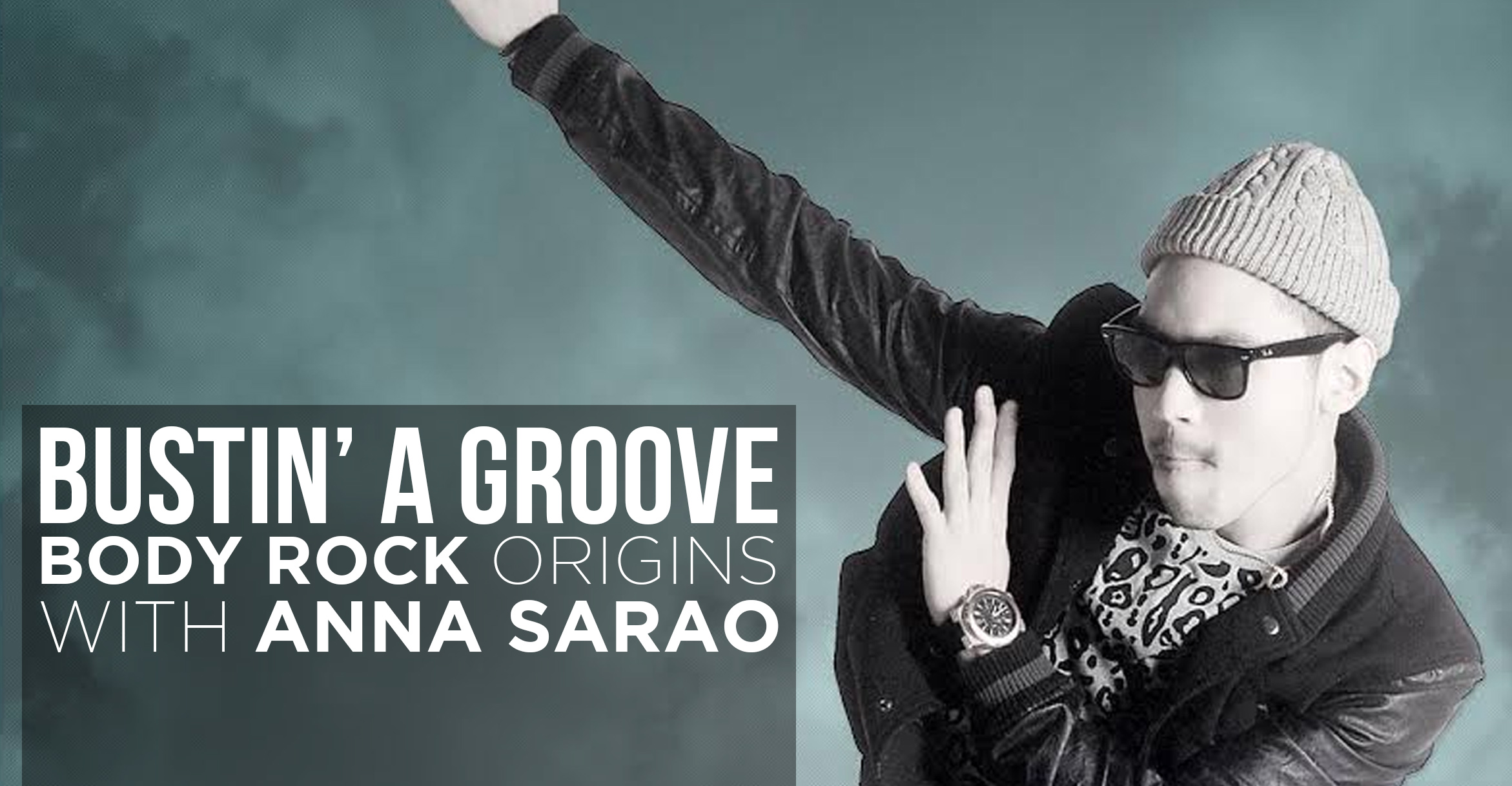 As a Socal dancer, or just a ...Cal dancer in general, you know what the major competitions are throughout the year. (To mention a few, there’s The Bridge, Vibe, Fusion, and Body Rock.) To get into any of these competitions is a blessing when you’re on a team, but for all the fresh faces in the community, haven’t you ever wondered why these competitions have been categorized as the competitions to go to, to work hard to get into, to have extra hell weeks for?

Founder of Body Rock (formerly known as Bustagroove) Anna Sarao, gives us some insight on the Body Rock competition, how it started, and the grooves she busted in order to rock everyone’s bodies. (She also has a very important message for the dance community, but I’ll save the best for last.)South of San Diego in a predominantly black, Mexican and Filipino neighborhood called National City, Anna Sarao grew up during a time of gradual permeation of Hip Hop in the media through TV shows like Yo!, MTV Raps and Soul Train, when people in her area danced in their garages and during lunches, dances and underground parties.

With a dance paradigm painted in her mind, Anna was surprised to see Hip Hop being taught at Mesa College by a white woman by the name of Angie Bunch (who would later become a close friend and mentor to Anna). Anna had had a personalized idea of what Hip Hop meant to her. “I thought it was a cultural thing! I didn’t think anyone would understand the moves the way you do when you grow up with the kids you grew up with. So I thought - 'no way, that's not possible...you can't teach hip hop in college ...how would people understand the same values and why it's so dope to me?'”.

Seeing that something she witnessed happening in the background in her neighborhood and at school was being taught for college credit at a learning institution was an eye-opening experience to say the least, for 18 year-old Anna.Anna would come to learn a lot more about dance and community in the following years, which paved the path to founding Bustagroove.

After losing a close friend who danced with her on Culture Shock for two years, she made a promise to herself to do everything her friend may have wanted to do. Simultaneously, Culture Shock was in danger of losing the dance academy they held practices at. With friends urging her left and right to create her own dance competition, Anna thought it only necessary to combine both, and created a dance competition to help fundraise to save the dance academy. “Back then it was literally a gym floor, and a show put together by friends; we hired the homies to help out - it was very small”, she recounted fondly.

The growing pains of Bustagroove didn’t stop there; Anna underwent a transitional period in her life when things gained traction: “we had all these promoters that kept promising that they would make us big, they kept saying ‘work for me, I can help you guys get to the next level, come to LA with me’, but I didn’t trust them”. Eventually, two out of the four friends that Anna originally founded Bustagroove with split off due to differences of opinion, and Anna and her two remaining partners renamed the competition in the spirit of new beginnings, to the name we are familiar with today.

“My greatest challenge [during that time]? To continue [Body Rock] - that’s it - because it was just ‘me’. My friends were still in school when I was building up Bustagroove, and in 2008 Body Rock almost stopped. I was broke several times” Anna recalled. “I thought, ‘what is my purpose? Why am I doing this every year? ’ I realized how much dancers had been sacrificing to get there, and it became more a self-doubt thing”.

With an unsuccessful contract breaching the trust between Anna and her then-business partner, Anna questioned the need and desire to continue the tradition. Serendipitously, Anna's friend Tommy Moseley, the associate pastor of the Rock Church (who she met dancing at Mesa College in Angie Bunch's class believe it or not), offered the church as a Body Rock venue at a discounted price in 2009, to which Anna feels extremely grateful for.

"If I had not been at that class, I would never have met him...and his invitation to help me helped save Body Rock and empowered me to continue it.  Talk about God providing!".Anna agrees the vibe of Body Rock has changed over the years. “In the beginning it did feel more like a community because it was smaller, and only because we knew EVERYONE - every director of a dance team, every dancer, was literally was my friend. It was the equivalent of having a party at your house”.

With the help of social media, Anna feels overwhelmed by the popularity of Body Rock in every state and country. But because of the popularity, Anna stresses the importance of being able to project ourselves onto those dancing on stage.

“You don't have to just be a dancer, you can do other things using your passion - you can follow your dreams, - you can do it! AS MINORITIES, WE can take the empowerment we feel through dance and use it for life.  For example, Keone and Mari are inspiring (members of Cookies) but they also own a Christian clothing line...Shaun Evaristo owns his own dance studio...Arnel is a doctor and manages dance crews.  That speaks volumes to me.  I want people to know, that when they watch that kind of passion onstage and feel connected, ... that - 'yes, that is also me'".

Despite the inevitable change of vibe, Anna wants dancers to take one thing away from Body Rock: inspiration. “When you see all of the dancing itself, the people that perform, the talent, I mean it’s enormous [...] no matter how many tweets, Instagrams and social media that’s happening, you have to be there - [...] you have to be there to experience it”. Currently, Anna is busying herself with Body Rock Juniors (June 28, two weeks after Body Rock) and a project for Outreach Through Dance (an organization that fundraises for the San Diego Make-A-Wish Foundation) with her friend and founder of OTD, Melissa Adao.

Through this partnership, she hopes to create a submission for the Asian Film Festival. What a superwoman.As for the very important message Anna has for the dance community? She wants us to remember that the message behind Body Rock should be about inspiration, and is growing increasingly concerned that over the years the message seems to have become sacrificing well-being and health for the sake of competition.

"I worry about the dancers overexerting themselves.  I know they have school and work ...and yes, I'm guilty of spending long rehearsals trying to make a routine perfect too, but through the years I've learned that balance is also important", Anna added after asking me what my personal experience was like preparing for Body Rock.

"I do believe we have a responsibility, as leaders, to take care of our teams.  And I don't wish for people to stress so hard to achieve that they forget why they love dancing in the first place.  This show ... it's memories for me.  It keeps those times that remain special for me alive, it keeps [Chris] alive, shoot -  it keeps me alive!   Body Rock is the culmination of all those years learning to love dance...and the celebration of the people I danced with".

And a celebration it should be.Thank you so much, Anna, for sharing your story and the foundation of Bustagroove/Body Rock with us. It was such a pleasure to hear such a rich backstory. Your passion for what you do is greatly appreciated by the dance community.To see the Body Rock line up, click here!Want to find out more about Outreach Through Dance? Click here! What are your thoughts on the responsibility of leaders/directors with regard to competitions? What does Body Rock mean to you? Leave a comment below to share your opinions with us! We also recently interviewed the renowned David Lee on how he got his start in dance and choreography. Find out what he had to say about his dance beginnings here!