How CSLA Shocked All People With A Powerful Story of Good VS. Evil

How CSLA Shocked All People With A Powerful Story of Good VS. Evil 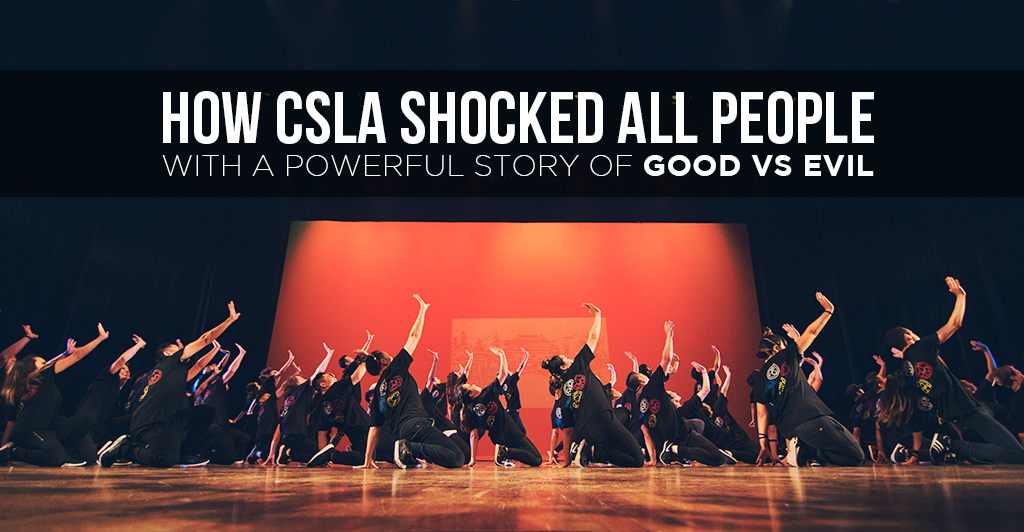 You are the universe, expressing itself as a human for a little while.

If there is one thing that the word "community" connotes, in any context, is the spirit of oneness. For those of us who use it sincerely, we refer to a place where there is no competition, no separation, no "you/me," but a collective "us."

This past Saturday, Culture Shock LA and collaborating teams illustrated how our community can come together to create something truly incredible. It's a show beyond dance, a message beyond movement, a feeling higher than winning. Oneness.

Oneness and unity play a big role in several different philosophies and worldviews, throughout history. The 4 elements: Earth, Water, Wind, and Fire, repeatedly appear as the simplest, most essential parts of which anything is made of: in nature, they manifest literally as the 4 properties that comprise the world. In modern science, they align with the four states of matter: solid (earth), liquid (water), gas (air), and plasma (fire). In the human body, Hippocrates used them to describe the four "humors" that balance man, both physically and mentally.

Dynamic and powerful, heartwrenching yet uplifting, the message left the audience hyper-aware of said yin/yang dichotomy. But more importantly, it empowered us all to nurture our "good" sides.

If you missed the show, or want to dig deeper into the magic- here's a recap, #4AllPeople.

10 years ago, a family member of one of CLSA's captains was shot and killed in a liquor store robbery. The team decided to throw a benefit show (titled "Heaven Sent") to support his family, and to honor all loved ones the community has lost. From then on, Culture Shock has hosted every single event with a specific purpose that benefits the community.

"When there is a collective mission for people to come together, something more meaningful than showing off artistry, we can do so much."

This year's show was narrated by the talented and hilarious Lawrence Kao, who played an old Asian sensei-type character.

He gathered a group of young dancers to tell the "tale of the 4 brothers"- and how each of them was gifted with an element:

Brother North, with Air- confident and self-assured,Brother South, with Earth- hard-working and grounded,Brother East, with Fire- passionate and strong,Brother West, with Water- free-spirited and independent.

Each of them possessed these unique talents, and the potential to utilize them for good in the world. The Air Clan (Maker Empire, Earth Clan (CSLA), Fire Clan (Club House), and Water Clan (CSLA) performed sets that exhibited their respective traits. Confident, Grounded, Passionate, and Free... All was well for all people.

Until.. the brothers were possessed by the Serpent of Sin.

"John John" Asperin, aka The Serpent, performed a moving spoken-word piece to depict how the brothers succumbed to the darker parts of their nature.

And of course, falling prey to sin doesn't come without repercussions. Gripping images of war, plague, genocide, hate crimes- were projected on a screen behind the Serpent, as the brothers fought each other, each blinded by selfishness and competition.

The intense beats of UCLA's Kyodo Taiko drummers dramatized the battle, until eventually, all the brothers fell to their death.

Mourning the death of her sons, Mother Nature (Karen Chuang) and Entity delivered a breathtaking performance that emoted this loss and devastation.

This is when the audience sees how dangerous our decisions can be, if we don't stay true to our virtues.

"There's so much devastation in the world right now. People everywhere are grieving. But the power to change that lies within each of us.Every decision you make is either love-based or fear-based. Each of us have the capacity to go either way. And even though there is so much tragedy around us, though it may be tempting or easy to do otherwise... We need to choose love. To advocate goodness and positivity. To change and impact each other in a beneficial way."

As a first-time performer at a CSLA Benefit Show, I felt honored and unexpectedly enlightened after this weekend. The show is unlike any other- absolutely void of any competitive energy or negative stress. All the dancers there were passionate, committed, and so noticeably open-hearted about each other and the mission. There was a contagious spirit of sharing and appreciation- such a refreshing change of pace.

"I'm always glad to see how the show open peoples' minds to how beautiful it can be when art has a purpose. Every dancer has extraordinary talent and potential reach. If we all perform as a means to share with, to inspire and uplift each other, we can all go so much further."

"The chance to do what I love for a cause is so special. Benefit Show allows us to express ourselves in an artistically liberating way while trying to make a change within our community in a way that's relevant to today's issues."

Aside from the vibe of the show, having different parts of our dance community collaborate was a unique and unforgettable experience. As diverse as our groups are, the synergy between all the teams was practically seamless- as if there was this unspoken understanding of mutual respect and appreciation.

Going back to the theme of oneness, we all have the 4 elements within us. Each of us are a human-shaped microcosm of "Mother Earth," a universe within a body. Further, our community is one. As individuals, and as a group, we have the choice to act on goodness, altruism, and beauty. We have the power to make changes, big or small, every single day. The production served as a reminder as to our infinite potential to be the good, the great, the best people we can be.Needless to say, Culture Shock LA's 10th Annual Benefit show was definitely beneficial... 4 AllPeople.

‍Have you had a recent encounter with a good vs. evil decision? Or a chance to use dance to express this dilemma? Comment below and share with us!Speaking of art with a purpose, read about how Cookies inspired a similar spirit of giving earlier this year at VIBE!