How Team Millennia Created The Set Of Their Dreams

How Team Millennia Created The Set Of Their Dreams 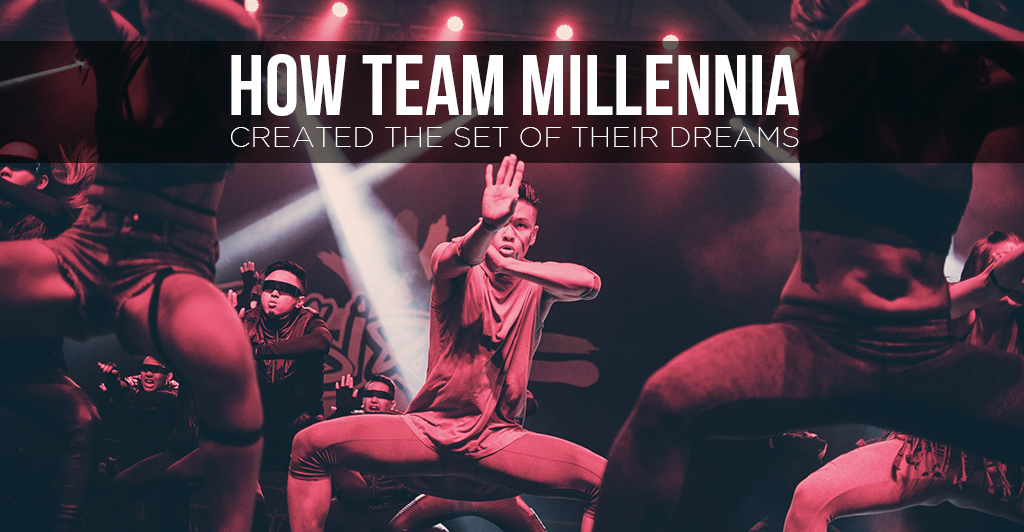 On Saturday May 2, 2015, TM got to debut its new set.  We called it The Game Of Love, and incorporated elements we’d always dreamed about using, but were too afraid to try.  A live band, one song, one premise: LOVE.  At first, none of us thought the idea would work.  But one by one, as we faced our fears and tackled our obstacles, we began to believe maybe we could bring this set to life.  A new thing.  A new creation. (For us at least)  A dream we wanted to make come true.

We made sure to give our all for Vibe and Fusion first, and waited until after they were done to really dive in.   Although we’d been doing behind-the-scenes planning for over 6 months, the actual choreography and staging took us about 2 weeks.  (2 of the longest, scariest, and most thrilling weeks of our lives.)

It was an adventure the likes of which our team had never seen.  With high’s, low’s, tears, triumph, and tragedy.  And because life is short, deserves to be treasured, and yearns to be shared, we would like to give our story to you.  The lessons we learned, and miracles we achieved for ourselves.  So just like Ricky Cole said, “Sit back, open your hearts, and join us in this Game of Love.”

All Things Are Possible For The Right Cause

Amazing things happen when your team is united in for a single purpose.  When you’re in love with your set, you change 50% of the staging 3 days before the show, incorporating last minute flips and floor work, because you know you can make it better, because the set deserves better.

For the chance at creating a performance you truly believe in, your people will transform themselves into superheroes.  They will mourn in silence for the pieces they’re not staged in, and take the hit because they believe in what you’re doing.  They will learn last minute stunts. They will remove themselves from formations.  They will sit out for the entire routine if need be and still love being at rehearsal.  They’ll cheer and scream on the sides, and feel just as happy for the teammates that are on stage.  They will spend the last 2 performances of their dance career on the platform singing, instead of dancing with their friends.

The right set can literally create miracles.  When everyone tells you it’s impossible, the entire time, and you keep going anyway, until you find a way to make it possible; that’s a miracle.

Everyone says they like being innovative and doing new stuff.  I know this because I say that crap all the time.  They also say that you will encounter road blocks and it’ll be hard, and guess what?  They were right.  For us, there were countless things to consider - props, musicians, amps, venues, money, money, and money.  What we discovered in the process is that whenever you try to do anything important, resistance will be there trying to knock you down.  Graduate college.  Lose weight.  Get a better job.  Try any of those and you’ll find a matching list of things trying to get in your way.

Lifting It Up To The Lord

At some point in every story though, comes the part when you really think it’s not gonna work.  You’re tired, the team’s beat up, you think it can’t get worse, but then suddenly it does.  You solve another problem and then five more show up throughout the week.  And through it all what we learned was that sometimes you just have to lift it all up to God.   We gave God our wish, we gave him our fears, we asked him to please get us up on that stage, and then we surrendered to whatever his decision would be.  And then we put on our Fedora’s, lifted our skirts up, and kept on going.

Ride or die, even if it ended up not going on stage, we were seeing this through to the end.  And it was pretty much like that until showtime, because until then we still weren’t sure if this whole new set was gonna happen.

And then it did.  Holy crap.  It happened.

What we really took away from that day was this realization:  The gift you’re fighting for isn’t the trophy, it’s the routine.  Most of the time we’re just hoping the set is good or if it has a chance of placing.  This time, we were just praying that we’d be able to do it.  And that’s when we knew that what we really had here was a gift from God.

The universe likes to create stuff, and it wanted us to create this new thing.  Not for money, or a trophy, or 2 million Youtube views.  This set was created by something higher, using our hands and feet, to make something we could be proud of and cherish.  Not better or worse than anything else, but most definitely our baby.  And special.

What To Do When It Doesn’t Go Your Way

And then comes the dreadful moment, (and it happens to all of us) when the outcome is different than you’d hoped.  How do you pick up the pieces when you some of your biggest hopes get shattered? Well, first of all you accept it.  You cry, and allow your teammates to feel what they’re feeling.

And sure, some of them scream, or faint, or run out into the street, and act like that crazy second cousin that jumps on Great Grandma’s casket at the funeral, even though he didn’t even know her very well.  (If you’re Filipino you’re laughing because you already know which cousin I’m talking about)  And then you listen to your team’s 5th year members, who remind you that this family has definitely been through worse, and has always handled things with dignity, so quit acting a fool.  Then you wipe your tears, put some makeup on, and carry that dignity with pride.

You realize very quickly, (mostly through the help of your brilliant directors) that perhaps this was part of God’s plan, too.  We asked for help on this one, and then we surrendered it up to the sky.  What we really wanted was to share The Game Of Love with the world, and maybe that’s all we were supposed to do today.  And now our prayers turn to tomorrow, and what that may possibly bring.

The love we received from every dancer in the building that night.  No jealousy worth feeding or grudge worth harboring.   Sharing happiness for everyone’s performances, and feeling the same love in return.  We are filled up knowing that what we created wasn’t in vain.  Thank you for taking the time to read this.  Till next show.  ☺

Here’s a link to our routine, with love, from TM.

[az_video_embed class="" link="https://youtu.be/DQotB17cK6A"]Have you ever encountered a situation that didn't turn out the way you hoped? How did you deal with it? Leave a comment below to share with us!