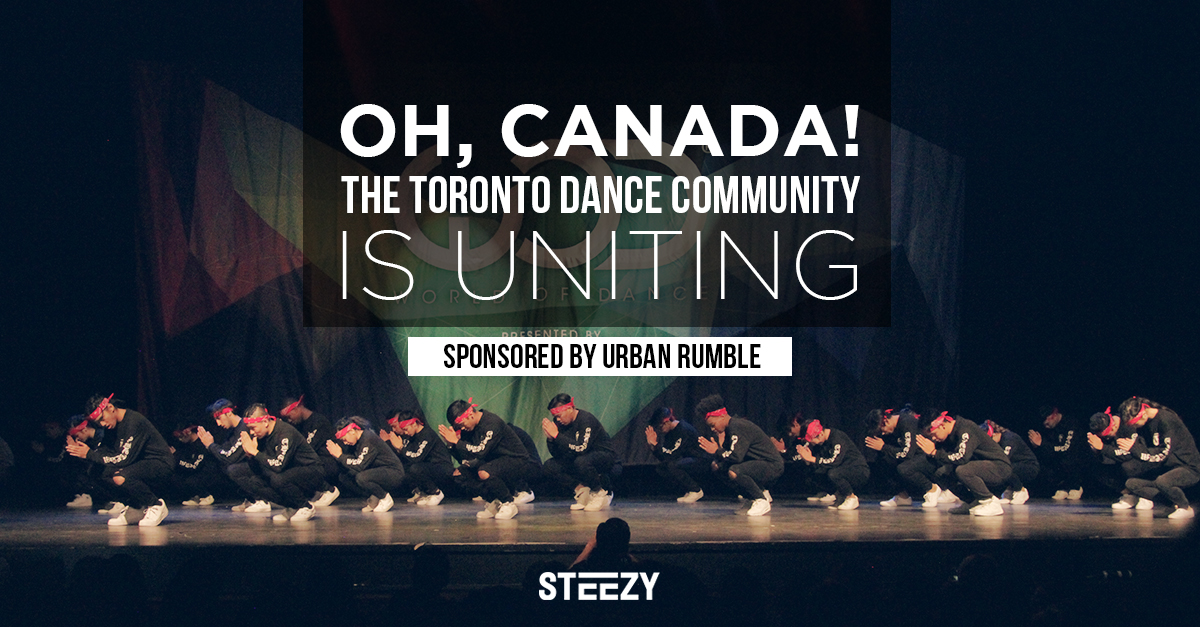 What do Justin Bieber, Drake, and Urban Rumble Dance Competition have in common? They all know good dancing. (Well, Drake, not so much..) And they all come from our friendly neighbor, Canada! There's been much buzz about the dance scene there, as international competitions such as Body Rock, Hip Hop International, and World of Dance has been bringing together our communities around the globe— where these guys are killin' it. Urban Rumble , which is to take place in less than two weeks, is another arena for different communities to come together and share their love of dance. But this time, we're staying local.On November 28, this new competition will unite Ontario's teams "under one roof to celebrate a night of dance." In order to set up some context on the event, Urban Rumble connected STEEZY with some of the community's leaders. Wanna dig deeper? You can. After all, it's not called Can'tada.

Gregory Villarico, Diamond Osoteo, and Patricia Gomba founded C2 as an independent extension of Toronto’s Youth For Christ Scarborough South West Dance Team. In 2008, C2 GENESYS became an independent dance collective, serving both as an incubator and a platform for emerging dancers and choreographers all across Toronto. Their focus is on talent development, as well as participating in and producing dance events.

Riman Rafi, the director of Urban Rumble Dance Competition started his dance career on C2, but as the commute took a toll, he founded his own team in 2013 with Aidan Rebeiro. "theTEAM" has since turned over to a new generation of dancers who lead the team with the same vigor and passion.

Fizz Oladiran started Reverb 2010. Though he and his teammates had never before seriously ventured into dancing, they were inspired by the hype around America's Best Dance Crew. By emulating what they saw on TV, they started making sets and competed in High School events (i.e. Toronto's Best HighSchool Dance Crew a.k.a. "TBHSDC"). These shows helped Fizz's peers see what it takes to build a strong team, as well as the importance of individual training to further the growth of the community.

YYZ, which is the airport code for Toronto's Pearson International Airport, is also the name of a familiar dance company. It was formed in 2012 by a group of recent high school graduates, including former Co-Director and Manager / current Underground Dance Centre's Studio Manager, Rougene Urbanozo. They represent dancers from all over the Greater Toronto Area- some dancers travel almost two hours just to get to rehearsal! YYZ Company takes pride in their smooth music mixes, and recent wins at competitions, such as being crowned the champions of World of Dance Toronto, and of the city's 14th annual STOMP Urban Dance Competition and Showcase.

One of Urban Rumble's judges, Paulo Santiago, started dancing with a faith-based dance crew called Project ONE. The adult crew, The ONE, competed in mega-crew competitions where they called themselves "I Rock With The ONE." They focused the dancers' training on hip-hop fundamentals, as well as choreography. After being qualified at the Canadian Nationals Dance Competition in Montreal to represent Canada alongside other Canadian teams, they competed at The World Hip-Hop Internationals in Las Vegas. Though there were no medals won, the opportunity to perform for the crowd, and the journey that granted them that chance, held all the rewards.

Dance, or art, in general, has the power to unite those from all kinds of backgrounds. Yet, as we share this common denominator of loving the same craft, our different backgrounds do create differences in the culture surrounding that passion. And that's what makes it all so interesting and beautiful: our diverse cultures that arise from the art, is an art in itself. Meta, right?

No doubt the United States' and Ontario/Toronto's dance communities have several similarities. But there are a number of distinctive characteristics of this art's art that are interesting to note, as our Canadian friends can attest to.

"When it comes to “crew” / “team” choreography competitions, the West coast of Canada is finding a lot of success.  Here in the East coast, our forte is street style and professional dance industries. However, our “crew” / “team” community has been steadily growing."

"I would describe Canada's dance community as a hidden gem, mainly because the talent was always there, but it was just a matter of time before the global dance community recognized us. We're grateful that our friends towards the west coast (Vancouver, Edmonton, Winnipeg) and Montreal in the east have represented Canada well, and I am confident that Toronto will have that opportunity very soon."

The competition scene's pace, it seems, may be attributed to the influence from the States.

"Our community as a whole hasn't yet progressed to the level to that of the States. The reason Toronto's dance community hasn't developed as quickly, in my opinion, is because we are looking to the U.S. for inspiration and following in their footsteps rather than letting our own ideas shine. A lot of dancers who travel from Canada to the States end up staying there to train and pursue dance."

But what makes the U.S., and western-Canadian cities able to thrive?

"The bigger cities in Canada have more resources available to them. They have competitive programs that push their teams/dancers, networking opportunities, studios, and the like. In Toronto, we have a habit of staying hyper-local— the intimacy is nice, but makes us not as easily known, unless you dig. Toronto is so diverse, with a "flvr" rooted in culture and music. We're making strides to let that flvr shine within the global dance community."

Classes, workshops, studios, choreographers are resources that our community can never run out of.

It's obvious that Southern California's dance scene is uber-saturated, with all that Roy mentioned. I asked what they wished Canada/Toronto had more of:

The freedom to take classes from world-renowned choreographers. Here, we have to wait for a workshop or a tour to come around to learn from the dancers leading the scene. If we had the same variety of skilled teachers and choreographers that were here, we would learn and grow at a faster rate.

Different communities all around the world have never been able to connect so quickly as our current technology now allows, which is great— but it will never beat the feeling of actually being there to witness these events in person.

— PauloBut really, resources are available if you want them to be. This is true of wherever you are in the world, in whatever you're pursuing.

Apart from being a city with a well rounded dance industry, Toronto is one of the worlds most multi-cultural cities making any and every style accessible for the discerning dancer / group. In Toronto, growth is a matter of choice.

Runnin' Thru The 6ix With My Ontari-woes

(*Gregory actually enlightened me to the fact that they don't really call Toronto the 6ix. Dammit, Drake.)

The development as an artistic community is never a challenge-less journey. Some bumps on the road that Canada's dancers experience are universal, that we can all relate to, and some are particular to the area.

The greatest challenge has been playing catch up. We (C2) started out as kids practicing on drive ways and parking lots with absolutely no formal training and no guidance. When the team began there were many small crews in Toronto, but no mega crews like Kaba Modern, The Company, Choreo Cookies (groups we looked up to). Our growth was very D.I.Y., but in retrospect it was more fun that way. 7 years later, the learning curve isn’t as big, but we always find something to learn or refine.

Those grassroots-like efforts, and knowing that the growth was earned, instills a lot of pride in those involved.

Toronto's dance community did not always support each other and there was a strong sense of competition. But now people are really starting to open up and its feeling more and more like a community.

Beyond the political, there is the logistical... and the financial.

The main challenge is not having rehearsal space. Rehearsing outdoors is difficult since we get such cold weather accompanied by snow.On a bigger scale our biggest challenge is raising funds to travel and compete in the States or across Canada. Since hosting an intensive/workshop is the main source of funding, our city's become so saturated with these events, with one taking place almost every other weekend.

In the future, I want the Toronto “crew” / “team” community to find its own voice.  We’ve spent a lot of years being inspired and holding ourselves to the standards of others.  It would be progressive to find ourselves, and be okay with it.

Needless to say, the entirety of Canada's dance scene has been on the come up, especially in the recent years. This is why everyone's been so amped for Urban Rumble- it will be the newest, biggest, and one of the most significant event debuts Ontario has ever seen. STEEZY is proud and honored to partner with this competition to help unite Canada's dancers and spread the talent, passion, and beauty in what we do.

Thank you to our friends for sharing some of Canada's story with STEEZY! And East Coast Canada- make sure to get your Urban Rumble tickets now!

Did you learn anything new from this article? What is the most interesting thing about emerging dance communities? Comment below and share with us!

Brush up on more history with a more comprehensive look the Evolution and Future of Our Global Dance Community.

Remember one of our first STEEZY Origins? The Super Galactic Beat Manipulators' and PAC Modern have stories worth reading, too!

Thanks! You're In.
Oops! Something went wrong while submitting the form.
Beginner Guides

How To Twerk On The Floor

How To Twerk With Your Hands On Your Knees

How To Twerk In A Squat