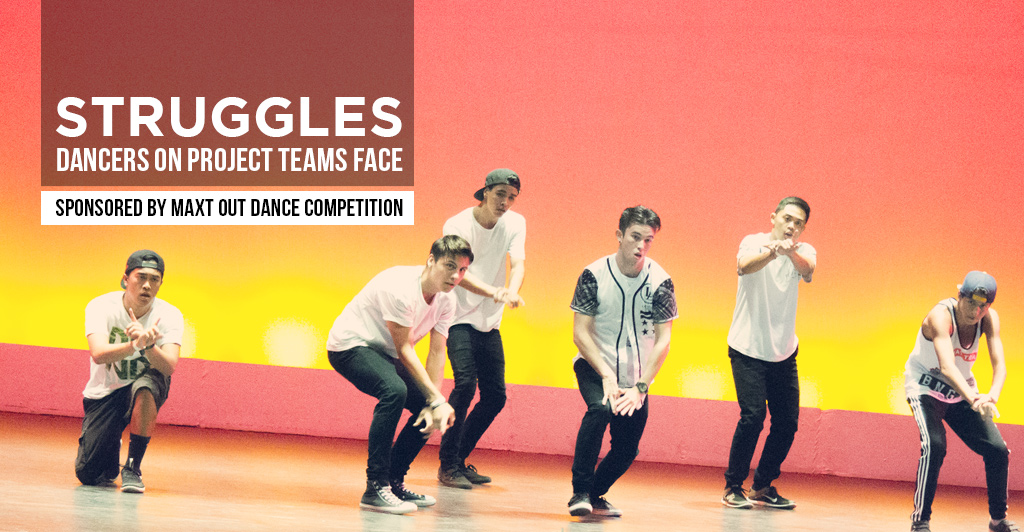 A project team is basically another reason to be ratchet with your friends, right? "Hell Week" practices are on Friday nights so that the line between practice and going out to the bars is blurred (possibly due to thirst quenching activities), right? If you can't finish a piece, walking slowly and smizing for 10 eights isn't that big of a deal because it's a project, right?

Contrary to popular belief, project teams are a lot more than just another excuse to exercise ratchetry on a Tuesday night. Projects have been growing each year, showcasing talents of dancers and choreographers from all around, and to project teams, Maxt Out Dance Competition is the place to shine. With Maxt Out's Major Choreography category, project teams have been becoming more and more competitive and going bigger each year.

Of course, a project team is still a team, and all teams have struggles, so we present to you the struggles that you might face on a project team, sponsored by Maxt Out.

Registration fees, costumes (we all have our fingers crossed for an easy color scheme #allblackerrthang), after practice boba/WeHo. Finding the money for your main team is hard enough, but if you're competing with your project team AND your main team, do you have to pay TWICE THE FEES?! The dollar menu is looking pretty good for dinner for the next six months... sigh.

Project teams often involve dancers from all over, and if the majority of them reside in Irvine and you find yourself in Riverside, well... I hope you have a Prius.

For some people, this project team is the only thing that is keeping them sane from their 9-5 corporate America jobs. For others, this is an escape from their crazy strict collegiate team where they can hang out with their other friends in the community. And for a few, this is one of 230948 teams that he/she is dancing for - we get it, you have a lot of friends and are super talented *eye roll*. Whether this is someone's only team or someone's other team, the struggle between the way that the dancers treat the project can be discomforting. Don't let the project team be a side bae; instead, choose to be polyamorous and treat them all like they're main baes. Everybody wins.

Unless you're down to dedicate a song to your side project, in which case, I hope you execute it like Drake and Brian McKnight.

4. That Awkward Moment When You Can't Make Any of the Practices.

If you have an adult person type job, you're probably sitting in a cubicle until 5 or 6pm, and you can't stay out too late because you have to get up at 6am to make that morning commute and traffic on the 5 is ridiculous 140% of the time. If you're in school, you have quizzes, homework, finals, and 'studying' to do. If you have another team you dance for, you have practices for those teams at least twice a week, and don't forget about mandatory castings and hell week(s). You think you'll have time for a project team? HAH! What is sleep?

5. Is Your Project's pH Level Greater Than 7? Because the Team Chemistry Feels Basic.

Project leaders: just because YOU get along with all of your friends does not always guarantee that your friends will get along with each other. At least on a regular competing team, most people don't know each other so bonding becomes a huge priority. However, if this is a second team for some people, going to get boba after practice to hang out isn't at the top of their to do list.

If you already HAVE friends on that team, why make more? That guy made a YouTube video, but I don't want to seem like I'm fangirling, cause I'm not. I'm just going to wait until he approaches me, and then act like I don't know about his video. Yeah. I'm friends with the project leader, isn't that enough?

NO, IT'S NOT ENOUGH.

But in the end, whose job is it to create good chemistry? Joanna Vargas from Maxt Out sheds some light on this:

A project team is like any other sports team. In order to have a good team, you need the chemistry - you need to know what your teammates are thinking before they know it, and you need time to learn about each other. When you change players on a team, you have to start all over again, so it can get time consuming and difficult.

The chemistry comes from the project leaders, as does all of the successes for the team.

The projects that do well are the ones with the best leaders/choreographers. If the project has good leadership, the dancers are more inclined to believe in the vision, otherwise you'll just want to tune out as a dancer.

Project teams have the potential to be amazing; you get to showcase your own choreography and artistic vision with all the people that you like and personally know are great dancers. Rather than having to be an exhibition team or competing against professional teams that practice in studios in front of mirrors 8 days a week, Maxt Out gives project teams the opportunity to grow and succeed, so project yo self before you wreck yo self. Get it? Like project but pro-JECT? As in the verb? Double entendre anyone?

Are there any other struggles of project teams that we may have missed? Add to the list by commenting below!

STAY TUNED FOR PART 2 OF THIS MAXT OUT TWO-PARTER, TO BE RELEASED LATER TODAY!