The Return Of Team Millennia Summer Intensive With Danny Batimana

The Return Of Team Millennia Summer Intensive With Danny Batimana 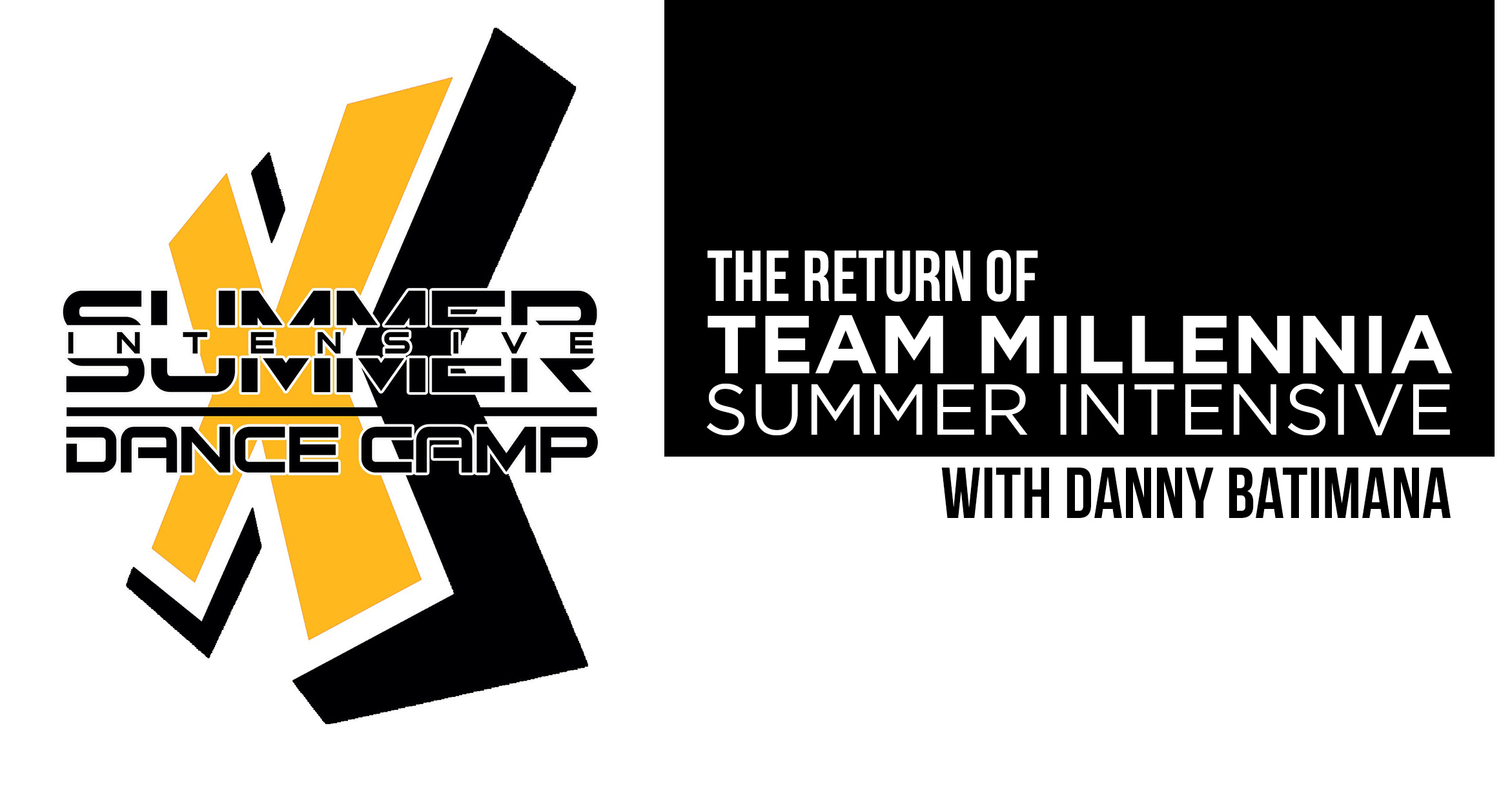 For most, if not all of you dancers, summer is the best time to take as many workshops as you can and to grow into a better version of yourself. Class and workshops exist in abunDANCE over summer, but there are few that are held dear to the hearts of every dancer in the community. We explored the origins of PAC camp last week, and we continue by interviewing Team Millennia's Summer Intensive's man of the hour: Danny Batimana.

Growing up in the Filipino culture, Danny starting dancing at the age of 8, where he danced at functions and family parties. He watched MTV - YouTube didn't exist yet - and learned from music videos and other dancers. In middle school, he started choreographing for a talent show, and when he moved onto high school in Diamond Bar, he joined the dance program offered. Though his style eventually became hip hop/jazz, he started with jazz and ballet, and then infused the hip hop he was learning to create something of his own.

In his senior year, he decided to join the dance team at school, where he was the only male on the team. That proved to be a great decision, for two of his teammates were Laker girls and had asked him, at age 18, to choreograph for them. He continued doing this and was led to choreograph for other NBA teams (such as the Clippers and the Portland Trail Blazers).

He then joined the American Student Association and was asked to choreograph, and from there, Team Millennia was born. He continued dancing with teams like Funkonometry LA and Culture Shock LA, but for the most part, was always with TM as a director, choreographer, dancer, and currently, an advisor. (Aside from this, he also did management for ABDC as well as for Poreotics!)

Team Millennia, first known as Culture Entertainment, has been around for 20 years, and the team is still going strong. Other than its longevity, one of the main components TM is known for is their Summer Intensive camp, which began in the summer of 2003, when TM's season ended after Bustagroove. Danny wanted to have a training program for his TM dancers to improve for the upcoming season, and so they would hire choreographers, both in-house and outside, to teach classes on regular rehearsal days (Tuesday, Thursday, and Sunday).

The next summer, they realized it had gone pretty well, and training in the summer was a good idea... so why not make a camp? The first of its kind, TM's first Summer Intensive was held under a bridge at Cal State Fullerton, with 80 students for $50/8 weeks. They would train and learn pieces on regular days, but Sundays were mock auditions, top 10s, and feedback on auditioning, which helped dancers train harder.

After that year, TM SI began to gain steam: they needed a bigger studio, more levels of technique, and more choreographers. As it grew and became helpful to dancers as well as other teams, TM SI was sort of a stepping stone for some teams to get better as a training program, as well as a way to teach dancers how to train and run a camp. With TM SI, there is inevitably a lot of work that needs to be done, including planning, organizing, and networking. Danny walked us through the process of organizing this huge project, emphasizing the importance of starting early - for this year's TM SI, Danny began contacting choreographers 9 months prior.

One thing people don't really know is that, because Danny is an artist as well and makes a living from teaching class, so Danny strives to ensure that choreographers are paid their rate or near their rate if they were to teach out of state or internationally. Even with community choreographers, he wants to make sure that they are taken care of, and he pays a little above the community rate. The reasoning behind this is that he believes choreographers tend to make choreography based on the amount that they're paid. In that sense, you can be certain that every choreographer at SI is motivated and happy to be there. TM doesn't profit much from SI, and they would rather pay for the value of dance that the dancers are receiving, as well as pay the choreographers for their time. The choreographer should be paid what they deserve, and the growing dancers should not be overcharged.

Of course, there are other camps that have developed since the start of TM SI, yet after all these years, SI is still the number 1 camp dancers attend. Danny treats SI like a business, thus he makes sure to know what other camps are doing and what they offer to keep on top of what dancers are receptive to, as well as working to always balance getting high profile choreographers and up-and-coming choreographers alike.

‍TM SI's success is not one to be tampered with though; SI has been around for a while, and they understand that people really want quality as well as consistency. Their pull is all about organization and timeliness - when you come to TM workshops, dancers can expect class to start and end on time, and to get what they paid for. The bottom line is that the focus is on quality; quality of the choreographers, quality of the dancers, quality of the organization.

Though Danny seems to know a lot about quality and success, there are definitely lows that balance the highs. It's tough to make sure the charges are justified (it's currently only $13 per class). It's hard getting people to the camp when struggling with prices per class. TM SI is a business in itself, and in order to run a business, you need to make sure that you're meeting your expenses. However, with a growing number of camps in the community, attendance at full capacity is not always a guarantee.

But of course, with all logistics aside, there are many proud moments, the moments of realization and the, "This is why I do what I do" feeling. For Danny, these moments include hearing gratefulness and appreciation from younger choreographers who are asked to partake in SI. Seeing up-and-coming choreographers, when invited, say, "Wow, thank you for inviting me to teach SI! I grew up watching SI videos and taking class, so I'm thankful for the opportunity" is something that makes Danny realize that what he's doing serves purpose, and that SI is growing and establishing itself as something of worth.

‍Team Millenia Summer Intensive isn't the only thing that Danny's currently working with though, of course. TM and TM juniors are now officially under the non-profit part of Happiness Is Now. Happiness Is Now has only been in existence for two years, and recently have finally become an official, government approved, non-profit. Now, all of their programs, including SI, Bridge, and Bridge Juniors are under this program, and through motivational presentation, they go to elementary, middle, high schools, colleges, and now into corporations with the message to spread happiness and to find happiness by doing something that they're passionate about. The main idea behind this is what Danny wholeheartedly believes is the happiness formula:

The happiness formula is finding what you're passionate about plus working hard, and it will ultimately lead to success.

Sounds like the happiness formula has definitely treated Danny well over the years of managing TM and SI.Danny and the rest of the team are really excited for what's to come this season with SI. This year, they've added beginning/intermediate levels, as well as a couple extra classes to the mix. While their magic number of choreographers for the camp is 16 (2 choreographers per week), when Mike Song agreed to teach at SI - well they just had to switch things around to add Mike Song in the bag of talent (who wouldn't?!).

Starting July 1st with Alan Truong from Architeks, TM SI still has classes open, but they're filling up quick. Make sure to register soon!Register for Team Millennia Summer Intensive Dance Camp here!What was YOUR most memorable moment from taking SI camp? What has SI provided for you as a dancer? Share your thoughts by leaving a comment below! We'll be posting an origins video soon about Team Millennia, but do you know the origins of PAC Modern? Click here to check it out!