The Struggles And Love Behind A Growing Dance Community

The Struggles And Love Behind A Growing Dance Community 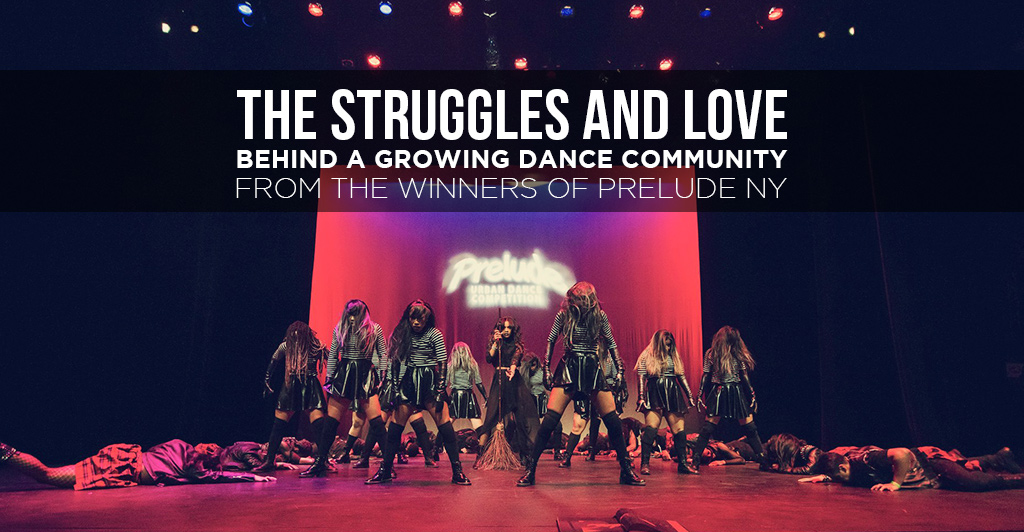 Some of us may have been b-boying and Breakin' the Spring this past weekend, others of us may have been finding Paradise at Urban (not outfitters), but if you were on the (b)East Coast and missed Prelude New York, you missed out. We sent a few STEEZY team members over to see what Prelude NY to check out the talent and performance out there!

CONGRATULATIONS TO ALL OF THE TEAMS WHO PARTICIPATED!

We were lucky enough to catch Rhythmology, PUSO Modern, and Project D after the competition and talk to them about the community on the East Coast so we can get better acquainted and educated. From practices to workshops to auditions to their community as a whole, the East Coast is very much alive and well, but most of all, hungry for its community to grow.

Each team expresses their same issues with practice scheduling: from school work to full time jobs, it's hard to coordinate practice schedules. Though some teams have very strict schedules, others will do their best to work around what is best and most convenient for the team.

"Our practices are pretty sparse. It's hard for us to pay the $25/month so we limit practices to about once a week. We'll start around 7 or 8 -- we basically wait until the valet leaves and then we're like, 'ALRIGHT GUYS GO INTO FORMATION!' And then we stay until around 1 or 2AM."

"We have practices twice a week but before competitions, we have practice everyday. It's really hard because we're all students; we all go to Stonybrooke and our team is collegiate, so it's hard to balance everyone's schedules. We all meet up after class [to practice] and then people have to leave early to study so it's kind of hard."

"For years we've had rehearsals on Tuesdays and Saturdays, and our team is based off of people from 18 to 26 year olds."

How many auditions are held?

Teams hold auditions in the beginning of the seasons, as well as offering midyear auditions and private auditions.

"We usually have a summer audition and that's for everyone to come out. Then in the winter, it's a private audition for people we know, like if it's a friend or someone who took a break because of school or an alumni, we'll invite them to a practice to train and see if they can keep up."

"We have one audition in the fall and one in the spring because we're collegiate, and we don't get to practice during the winter or summer because we're all over the place [geographically]."

How are competition seasons measured on the East Coast?

How do you see the East Coast dance community? Is it growing?

"I feel like we're a circle. A big, happy circle."

The Jersey scene is fairly tight with everyone, but then there's the New York scene and others outside of their area. They're trying to integrate all of these areas by attempting to expose their teams to others, but ultimately, it is up to the teams who want to come out and bond with other teams that make it possible.

Rhythmology and Project D at one point were one team, and there are some Puso Modern alumni on the team as well, so they've always been connected. They've danced with each other in some way, shape, or form in the past and they're continuing to expand through different ways of exposure, from competitions to workshops.

Speaking of workshops, are those a big deal in the East Coast?

"We're like a melting pot. Sure we've had our share of influences from the West Coast, but we take pride into the choreographers that we do have out here because I think there's a lot of talent around this area."

"We also will have workshops based on proficiencies we need to work on. For example, DMV [DC, Maryland, Virginia] is nasty at freestyling in terms of style, so sometimes we'll invite poppers to come here and teach a workshop. Our choreography is good, it's just that sometimes we need to work on the foundations. Fundamentals are important."

How do you see the East Coast Dance Community growing?

The East Coast is making moves, reaching out to teams in different areas, giving props where it's necessary, and bringing out different teams to teach workshops. They want to bring teams, and no matter where each team is located or what styles they personally thrive in, their mission to become a community is very real.

"I think it's happening slowly and you can see it. There are Facebook groups that show threads from different people with the same mindset of, 'Hey listen, the East Coast has something to offer.' It started out very sparse because everyone is super far away, but we're slowly banding together to develop a voice. It's a slow process, but we're becoming one loud and hungry voice."

"The only thing we lacked is exposure. There has always been talent here but because everyone is focusing on competitions, they're not really pushing their art out, like with videos showing what we have."

Any last words for the STEEZY readers and for the East Coast Dance Community?

"You guys do articles about the East Coast and it is something that we can empathize with! We feel so connected! The West Coast is cool, and when we see the problems that you face, we're like, 'Hey we feel that too' and it makes us realize that we're not so different."

"Reach out! For any dancer reading this: we're here with open arms, and we go to competitions to show love as much as we can, so let's unite the East Coast."

"Rhythmology has recently been hit with a legal issue and our name can no longer be used unfortunately, but the rest of the community has shown us so much love. The foundation of the community is based on love."

So let's just summarize this insight on the East Coast community real quick: they have practices once or twice a week regularly and sometimes struggle to find spaces to practice and have scheduling issues, they compete during the seasons and train during off season, they hold auditions once or twice a year, and they are constantly trying to grow their community by supporting one another and showing love through their passions?Wow that sounds... almost UNIVERSAL!No matter where you're located on a map, the fact is that we all have one love and we all share that same passion and hunger for dance. Now that we support each other within our own communities, maybe it's time to branch out and show some love for communities abroad. The East Coast is ready!

Tags:
No Tags :(
Sharing is caring.
Copied to clipboard

How To Dance Hip Hop For Beginners

How To Start Dancing

How To Start Dancing – Hip Hop For Beginners