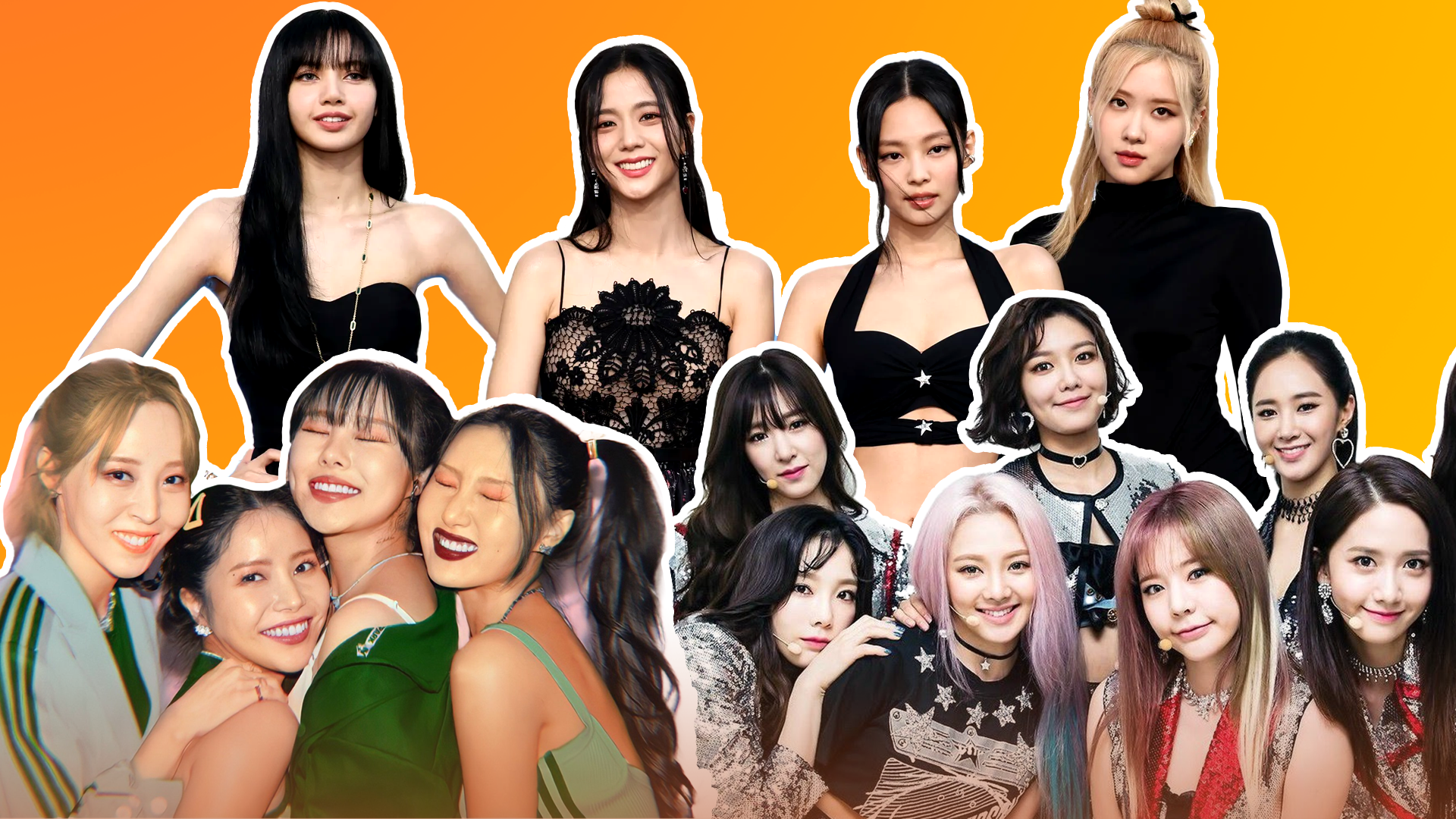 Wondering who is the most famous girl group in South Korea? Or how much K-Pop girl groups’ salaries are?

We’re breaking down the list of 2022’s most successful K-Pop girl groups to give you a run-down.

While K-Pop boy bands like BTS might get more international buzz, the K-Pop girl groups are seeing their fans grow into hundreds of millions of followers.

Who Are the Top 10 Most Popular K-Pop Girl Groups?

Also known as SNSD, the SM Entertainment eight-member band has one of the longest running successes in K-Pop band history. Making their debut in 2007, members Taeyeon, Sunny, Tiffany, Hyoyeon, Yuri, Sooyoung, Yoona, and Seohyun became one of the most popular groups throughout Asia in the 2010s.

They have the distinction of being named “The Nation’s Girl Group” by South Korea as well as being the first non-Japanese girl group to be certified for one million in album sales. Billboard also named them the “Top K-Pop Girl Group of the Past Decade.”

Today, three years since their last record release, the group is all grown up and working on independent projects, starring in films, K-dramas and creating fashion lines. Still, they continue to have a musical presence on YouTube with 200 million views. Get in on some nostalgia with the STEEZY "Gee" x Girls' Generation lesson here.

‍Hey, thanks for reading our content. Claim your 30% off when you use KPOPGROUPS30 coupon code when you register for our STEEZY dance classes yearly subscription.

Cube Entertainment brought together (G)I-DLE in 2018. The group, made up of five members, Miyeon, Minnie, Soyeon, Yuqi and Shuhua, have the distinction of being more than just performers. The group has contributed significantly more to the songwriting and music than most K-Pop bands do.

This has given them greater industry respect, along with their focus on appealing more to the sensibilities of female listeners over their attractiveness to men. They recently released their first studio album, I Never Die in March of 2022 and have plans for a world concert tour in 2022 as well.

Their YouTube channel has over 1.4 billion total video views. Since they are still in the early stages of their career, the band members have a lower net worth than some of the other bands on the list, but still ain’t too shabby with an estimated $3.45 million. Wanna learn some (G)I-DLE K-Pop dance choreography? Take our class to learn their K-Pop moves.

It might be a year now since GFriend disbanded in 2021, but they still deserve props for capturing over half a billion video views of their YouTube channel. Their label, Source Music didn’t renew the contract, so members Sowon, Yerin, Yuju, SinB, Eunha, and UmjiIn are no longer together. However, those last three members have launched a new trio VIVIZ in 2022 and are creating a new fan-base. Get a little old-school with some classic GFriend choreography here.

Loona (sometimes written LOOΠΔ) was named by the South Korea Ministry of Culture as ambassadors of Korean culture for the rest of the world. They were chosen for their talents in promoting Hallyu and Korean culture overseas.

Impressive but too bad they have to divide that by a dozen girls. This Blockberry Creative group has amassed close to 700 million views on YouTube. Learn some of Loona’s dance moves with this STEEZY class.

OMG! Even the Girl Scouts of South Korea love this girl band, appointing Oh My Girl as promotional ambassadors for the girl power organization. Beginning in 2015 by WM Entertainment, this K-Pop girl group might not have the numbers of some of the bigger groups.

Their earnings are reportedly around $300k for 2021. But they are still attracting close to half a billion views on YouTube. Members Hyojung, Mimi, YooA, Seunghee, Yubin, Arin are now a six-member band with the departure of Jiho in May of 2022.

The group named for baby babbles isn't playing around when it comes to racking up trophies. They've won 45 of the 163 awards they've been nominated for across Asia, Europe and the States. With their wealth estimated between $10 to $15 million, the group which began in 2014 has over two billion video views on YouTube.

Members Solar, Moonbyul, Wheein, and Hwasa were brought together by RBW. Eager fans are patiently waiting for a comeback and concert dates but as of May 2022, it’s not looking promising. Instead fans will probably have to settle for individual members solo efforts before any tour or new album release dates get announced. Make moves like Mommamoo with this STEEZY online dance class.

Veterans of the K-Pop music scene, Red Velvet debuted way back in 2014. Members Irene, Seulgi, Wendy, Joy and Yeri span an eight year age range, which is a bit outside the norm for K-Pop girl bands. Their name is said to describe their music, with some being light and fun electronic hip hop and others being dark and brooding topics with R&B ballads and jazz vibes.

Closing in on one billion YouTube views, the band currently has 5 million subscribers to their channel. They recently released their mini-album, The ReVe Festival 2022. Red Velvet’s earnings for 2021 are estimated between $1.6 - $2.1 million.

Still relatively new on the K-Pop scene, JYP Entertainment brought Itzy to audiences in 2019. They’re famous beyond their energetic K-Pop sounds, making TV shows for the last four years. Most recently Itzy announced a collaboration on the release of Pokémon Legends: Arceus.

Their YouTube channel, which recently began featuring members Yeji, Lia, Ryujin, Chaeryeong, and Yuna on living cooking streams, has over seven million subscribers with 1.5 billion views. According to KpopStarz, the band is worth over $6 million. Can’t get enough Itzy? STEEZY has a host of Itzy dance choreography videos. We suggest beginning here and here.

They came on the scene in 2015 thanks to JYP Entertainment survival TV competition, Sixteen. Singles like “OOH-AHH” and “Cheer Up” launched them to international fame. Their total earnings are said to be around $35 million although this is split over the nine-member band.

One of Twice’s biggest achievements came when they became the first female K-Pop band to be number one on two world Billboard music charts. They currently boast 13.7 million YouTube subscribers with 3.4 billion video views. In May of 2022 they completed a 14-stop world tour. They’ve gained fans worldwide with a mix of traditional K-Pop along with Japanese and English-sung lyrics.

STEEZY currently has nine TWICE choreography classes for you to learn these ladies’ moves. Members check some of these out here, here and here.

All hail Blackpink, the reigning queens of K-Pop. According to their label, YG Entertainment, the name Blackpink is a contradiction of sorts, meaning you can be pretty and talented at the same time, or something to that effect.

The four-girl group, who debuted in 2016, hails from around the globe with Jisoo the only member from South Korea. Jennie was raised in New Zealand, Rosé, Australia and Lisa is from Thailand.

For 2021, estimates suggest they earned close to $30 million in 2021. In the US, they’ve received three People's Choice Awards, a Teen Choice Award, and an MTV Video Music Award. That’s in addition to their countless music awards in Asia.

They also nabbed their sixth Guiness World Record in 2021 for being the most-subscribed band on YouTube. Today they have 74.2 million subscribers and close to 24 billion video views. Their most successful album is Blackpink In Your Area while "Ddu-du Ddu-du" is currently their most popular single with 200 million Spotify streams and close to one billion YouTube views. We’ve got a wide assortment of how-to dance like Blackpink dance instruction videos. Learn from the best in K-Pop choreography with these lessons.

Who is the most followed female K-Pop idol on Instagram?

BlackPink’s rapper/singer Lisa (lalalalisa_m) is by far the most followed female K-Pop idol on Instagram. She has 77.6 million followers on the Gram, where she posts fashion shots and a glimpse into her daily life. She’s followed in Instagram popularity by the rest of the members of BlackPink, who all make the top five list of most followed K-Pop singers on Instagram.

Related Article: Collection Of Top 50 K-Pop Memes Of All Time

Who is the richest female K-Pop idol?

Singer, actor, and composer Lee Ji-eun, better known as simply IU tops most female K-Pop net worth charts. According to NetWorthy as of 2022, IU has a net worth of over $25 million USD, while other sites suggest it may be more like $40 million thanks to numerous endorsements and songwriting royalties.

If we’re talking K-Pop girl groups, then once again BlackPink is topping the list. Thanks to multiple endorsements deals with everyone from Adidas and Calvin Klein to Samsung, As of January 2022, according to SeoulSpace, BlackPink’s rapper Jennie is reported to be worth between $15-18 million USD.

Dance is as much of a part of K-Pop performances as the music and lyrics. And now you can easily get those K-Pop moves down, just like you’ll find in these girl groups’ music videos. Here’s three of our favorite K-Pop choreography lessons to get you started!

“The Feels” by TWICE

Learn step-by-step the second chorus to Twice’s hit song “The Feels” with STEEZY instructor Linda and her assistants Nikki and Tracy.

Join Ellen and Brian as they break down all the steps to the point moves in Itzy’s popular dance song “Wannabe. This under-10 minute lesson will give you all the basics you need to hit these shoulder shrugs and twists, a staple of K-Pop choreography.

Linda, Nikki and Tracy are back helping to teach you all of the dance moves for the chorus to Twice’s “Feel Special.” Did you know you can speed up and slow down STEEZY’s dance instruction videos with just a toggle click? It makes it so much easier to fly through parts you already know and slow-mo moves you’re still trying to learn. Give it a try right now!