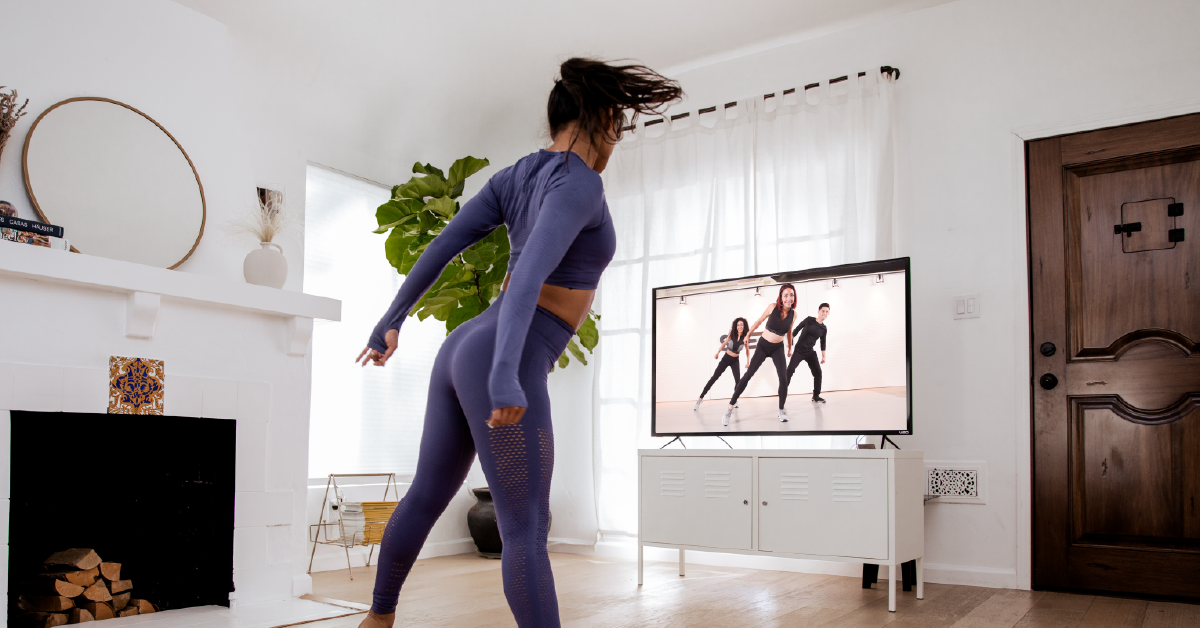 When you think of “Jazz dance,” what do you picture?

Dancers doing the Charleston in a Harlem nightclub?

Competitive dancers in glittering costumes, strutting, stepping, and kicking across a stage?

The truth is, all of those mental images are correct, but it’s important to understand the history and evolution of Jazz dance to learn about the style authentically.

Read on to get a crash course on what “Jazz dance” truly means to dancers, and how you can learn the style –– the right way.

Jazz dance is a social dance style that emerged at the turn of the 20th century when African American dancers began blending traditional African steps with European styles of movement.

Though Jazz dance was born through intimate religious and social gatherings, it has always had a performative feel.

The African dances that built the foundation of Jazz were explosive, grounded, sensuous, and rhythmic.

And like Jazz music, Jazz dance was centered around improvisation and a call and response format that allowed dancers to create a conversation between the musicians, the instruments, and their bodies.

When Black dancers began pairing these eye-catching steps with the more structured movements seen in European dances, iconic moves like the Charleston and the Cakewalk were born.

Here are a few Jazz dance moves every beginner should know:

Quick transfer of weight from one foot to the other

A four-step movement in which the dancer steps across, back, to the side, and then to the front, making a square pattern on the floor

Step out in any direction in plié, then jump and “chase” the first leg with the second, landing on the first leg –– like a gallop with pointed toes

A popular move in which the weight is shifted from one leg to another, with the free leg being kicked out either forward or backward at an oblique angle

A move where the weight is transferred quickly from one foot to the other in three steps.

The Evolution of Jazz Dance

Like any dance style, Jazz didn’t appear suddenly or exist in a cultural vacuum.

It was a slow evolution that changed with the times –– and the most popular music of each era.

Though Jazz dance started becoming popular in the Black spaces in the late 1800s, it wasn’t until the 1920s that Jazz music and dance spread to other communities.

In New York City, a large influx of Black families moved to the Harlem neighborhood where increasing Black pride kickstarted a period of creative exploration known as the Harlem Renaissance.

Concert venues and clubs sprang up across the neighborhood, and white audiences began visiting to hear live Jazz music and watch dancers perform on stage.

The influx of money from white spectators pushed Jazz dancers to focus on creating a spectacle for the audience in front of them, rather than simply one-upping those on the dance floor around them.

This is why dances like the Charleston skyrocketed in popularity. They could be done facing forward so the audience could see the intricacies of the move –– and try learning it on their own.

And as white dancers flocked to venues like The Savoy Ballroom and The Cotton Club, they took the moves home with them.

Eventually, Jazz musicians who wanted to avoid appropriation from white audiences began shifting to Bebop, which was centered around improvised singing and instrumentation that many club-goers found less danceable.

As a result, choreographers like Jack Cole and Jerome Robbins began appropriating traditionally Black Jazz dances for purposes outside of the club.

They added more Ballet-inspired steps and brought the newly codified moves to Hollywood and Broadway, just as the Golden Age of film began.

Choreographers started using highly trained dancers who were tasked to perform more precise versions of Jazz dances, which ushered in a new era for the style.

Unlike most dance styles you’d watch on stage, professional Jazz dancers were expected to effortlessly balance uniformity and personality.

After all, personality and individual style were a vital part of Jazz’s initial culture, but you couldn’t have an entire theater company executing different moves!

Then, as the Golden Age of film gave way to television, Americans were introduced to a greater number of cultures, which allowed other styles like Caribbean and Latin dances to begin mixing in with Jazz too.

But when MTV launched in the 1980s, and music videos became the number one way young people consumed dance content, Jazz saw a resurgence in popularity.

People wanted to learn the fun and flashy moves they saw on TV, and looked to dance studios, workout tapes, and the competitive dance scene as a place to learn and perform.

Jazz was a familiar, accessible style that had become synonymous with American performance culture, so once again, the style was re-codified to fit with the types of music people enjoyed.

This led to the proliferation of Jazz subgenres, workouts like “Jazzercise,” and large-scale competitions across America.

By creating subgenres of Jazz dance, it was easier for studio owners, choreographers, and competitions to attract business.

For example, someone who’s familiar with Funk music and dances might be more attracted to a dance class called “Jazz Funk,” as it seems familiar and relevant to the popular music of the time.

Or a competition that has both “Lyrical Jazz” and “Modern Jazz” as categories can attract a larger audience and sell a greater number of tickets.

Here’s a quick breakdown of the most popular Jazz subgenres, and how they are interpreted by professional dancers:

As Jazz became increasingly known as the “American” dance style, it became the perfect bridge between Black and white culture, even though it was originally a Black dance style.

For new, non-Black dancers who wanted to learn Hip Hop or Funk, but didn’t feel comfortable learning a style that was dominated by Black music, “Jazz Funk” functioned as a crossover style.

Today, Jazz Funk is typically executed to Pop music that has hints of Funk and Hip Hop, and the moves are a mixture of traditional Jazz steps and moves popularized after 1970.

As more emotional ballads took over music videos, it was natural for dancers to allow lyrics to inform their dance moves rather than percussion or brass.

Studios and competition shows like So You Think You Can Dance began using the term “Lyrical Jazz” to describe choreography that paired Jazz steps with lyrical content, rather than big band music.

When taking a Lyrical Jazz class, you can expect the movements to be slower and more Ballet-like, in order to better match the song.

Modern Jazz is the bridge between Jazz and Modern dance, which is more technical, yet grounded.

Many cite the choreography pioneered by Martha Graham as a basis for Modern dance.

Her style features a manner of movement called “Contraction and Release,” where each movement could be used to express freeing or constricting emotions depending on the placement of the head.

In Modern Jazz, this Contraction and Release technique is still used heavily, along with weighted, rhythmic Jazz steps.

Their background dancers can be seen doing Jazz Squares and Pas de Bourrees, but there’s a heavier emphasis on flashy turns, jumps, and trendy moves.

Though Jazz dance is recognized as the #1 American dance style, in recent years, many studios stopped treating it as a foundational requirement for new dancers.

Now, dance scholars around the world are bringing attention to the importance of Jazz in dance education.

“Being able to be sharp, rhythmic, and filled with personality all at the same time… that skill is needed for so many different dance styles! If you’re able to train in each era of Jazz dance –– traditional Jazz, the technical skills from Broadway, the showmanship and passion from Jazz-influenced music videos… you’ll really have a great foundation as a dancer.” –– Laura Ann Smyth, STEEZY Jazz Instructor

And with new iterations of Jazz music like Electro-Swing, and dance venues across the country revisiting the original Jazz music of the 1920s, Jazz dance is finding a new place in social spaces.

Looking to get a little inspiration from the Jazz dance greats?

There are tons of Jazz dancers and choreographers who’ve greatly impacted American cultural history and the ways we’ve danced in every decade.

Here are few notable artists to check out:

Known as the Matriarch of Black Dance, Dunham blended Caribbean movements with Jazz by incorporating body isolations she learned through Anthropological trips.

A trained Modern dancer who became a Broadway favorite for his uniquely exuberant movements, and inspired other greats like Bob Fosse and Gwen Verdon.

Gene Kelly was a playful presence on-screen and off, who used his Ballet foundation to wow audiences with his high-energy execution of Jazz dance steps.

One of the most famous Jazz choreographers of all time who created iconically provocative dances for Broadway musicals such as Cabaret and Chicago.

With an ability to flawlessly blend the clean lines of Ballet, visceral strength of Modern dance, and rhythmic isolations of Jazz, Beatty became a popular figure in both the Ballet and Jazz communities.

Pat celebrates Jazz origins in the present day by choreographing works that focus on the interplay between live Jazz music and imaginative storytelling.

How to Learn Jazz Dance

To get a well-rounded and authentic learning experience, it's important to honor each stage in the story of Jazz dance.

In-person or online classes are a great place to start, as you can learn the basic techniques, step-by-step.

Search for in-person or online classes with queries like “online jazz dance class” or “jazz dance class near me” –– then, look for classes that mention traditional moves like the ones outlined in this article.

Carefully read the class descriptions or chat with the instructor ahead of time if possible! Once you find a class that teaches the authentic moves, you should narrow down your search by looking for instructors who teach the history of those moves too.

For your Jazz dance class, you shouldn’t need any special equipment or pre-requisite training.

Comfortable, breathable clothing is best, and Jazz shoes/sneakers or non-restrictive running shoes are perfect for dancing on hard floors.

If you’re dancing in a carpeted space at home, bare feet will work too!

Just make sure you have about 6ft by 6ft of space so you can kick, jump, and turn with ease.

Lastly, keep in mind that Jazz dance requires technical skill and practice, but the best Jazz dancers are the ones who approach it with soul and spirit.

‍
“Sometimes, I have a dancer in my class who gets every single move perfectly, but the emotion isn’t there. Even if you can’t put your finger on why, you can tell that they aren’t connecting with the story or the emotion captured by the song. But then, another student will mess up a kick or forget to point their toe, and it doesn’t even matter. You can see that they are so invested in the performance and telling a story with their body that you end up watching them from the edge of your seat.” – Jason Myhre, STEEZY Jazz Program Advisor