What You Ought To Know About Prelude NorCal Dance Competition

What You Ought To Know About Prelude NorCal Dance Competition 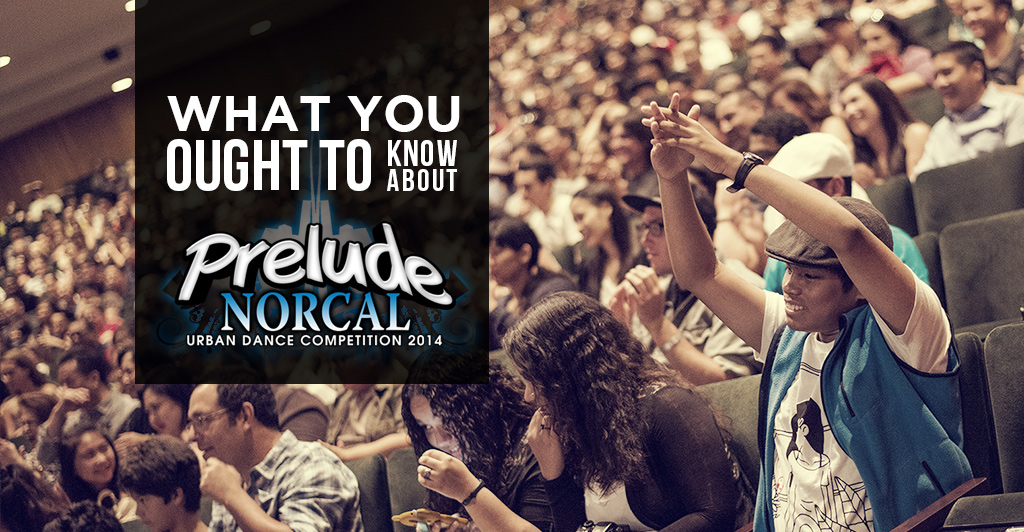 If you are a dancer attuned to the happenings of the dance community, you know that Prelude NorCal falls around late November and is hosted by Main Stacks up in the Bay. Those who have attended this event have been able to experience the tight-knit, warm energy that Main Stacks brings to this competition, so it is without a doubt that Main Stacks has perfected a formula for organizing an event like Prelude NorCal, to ensure it goes off without a hitch.

From extremely intricate day-of schedules to specific runners and volunteer schedules (trust us - we've seen it!), it comes to no surprise that Prelude NorCal has been such a successful event in the dance community for so long.

This year, Prelude NorCal is on November 22nd, and the Main Stacks board of directors are hard at work, making sure they bring us dancers the best show they can. To gain more insight on the behind-the-scenes madness that goes down with Prelude NorCal, we were fortunate enough to interview this year's Executive Producer, Asia Tallino. You definitely don't want to miss what she has to say about the NorCal/SoCal dance communities, either - we love it and agree 100%!

STEEZY: When did you get started with dancing?

Asia: I started dancing when I went to high school. I was a competitive gymnast at the time who loved performing on the floor and beam, so I figured I'd also try to dance. I joined my high school dance team, which was super fun. I also experimented with all genres of dance, but it wasn't until college that I truly discovered and learned competitive "urban" dance, or as most people are introduced to it, "hip hop" dancing. I saw the [M]ovement (another Cal team) perform at Calapalooza (a club event at UCB), and was walking towards their table when I got pulled aside to Main Stacks' (MS) table...

STEEZY: What teams have you been a part of?

Asia: Main Stacks has been my one and only. Haha, what can I say, Stacks has my heart. I danced with MS all four years of college, and was always more than satisfied. I do look forward to dancing non-competitively with Senior Stacks (the MS alumni team project) this fall at Prelude though!

STEEZY: How did you become the 2014 Executive Producer of Prelude NorCal?

Asia: After my first year on Stacks, I was really inspired by older 'stackers' to invest more into MS, so I joined MMS, the board of directors for the team. After doing MS positions such as finance and captain, I decided I wanted to get a slightly different experience as a leader, and take on a position that would allow me to have a scrappier and more creative role, and would allow me to reach out to the greater Bay Area dance community, with whom I've fallen in love with these past 4 years. I was elected for Prelude Exec in 2013, and decided I could also commit to it this year one more time before handing it down to the youngins. It's been a life-changing experience to realize I, as a young person, can actually do something, and it's been insanely rewarding to see dancers happy and together.

Check out the official Prelude NorCal Teasers above!

STEEZY: Tell us about Prelude NorCal. When did the competition series start, and how?

Asia: Prelude Norcal has been around for a little while (there was also a Prelude SoCal) and was hosted by TM, but TM went on a break for a couple of years. Tony Calub then became the sole owner of the Prelude competition series, and has since brought the Prelude series across the nation. Tony was the one who approached Main Stacks in 2010 to be the hosts of Prelude NorCal.

May Matsuo and Vivian Peng (who are also the founders of MS) took on Prelude as the first Prelude Exec and Company Manger. They set a really strong logistical and moral foundation for how we choose to run Prelude to this day, in our 5th year of hosting it. I'd like to take a moment here to give credit to May and Viv as two of the most humble, hard-working, and just downright chill people I've had the privilege of knowing. Without these two mamas, MS and Prelude NorCal would not be where they are.

STEEZY: What are some of the biggest challenges organizing a competition like Prelude NorCal?

Asia: I think naturally, just coordinating with a lot of people, and all sorts of people, is pretty challenging. Everyone has their own lives, their own interests, their own priorities, their own language quirks. So sometimes it's a bit of a juggle to get little or big events organized efficiently, while still maintaining the happiness and genuine passion in the work.

Although there have been obstacles, it's been really fun to meet and work with so many different individuals that we never would have crossed paths with, and honestly, getting more people involved simply makes the creative process a lot more developed and well-rounded. My little phrase to getting people to do the work/things you want them to do is to be "politely persistent and patient". Basically, that means just following up with people consistently, while maintaining a positive and polite tone of voice, rather than getting annoyed/annoying.

STEEZY: What do you want dancers competing at Prelude NorCal to take away from the experience?

Asia: Smiles, new friends, stronger bonds, a sense of community, satisfaction, a renewed gratitude for the ability to even dance, inspiration to keep going, and to go bigger, confidence, hope, happiness, and...stickers.

STEEZY: Run us through what goes on the day of Prelude NorCal - how do you make sure everything stays on schedule?

Asia: Haha, I don't think I can run through the day easily here without boring everyone... but I can give a behind-the-scenes at the documents we use to make sure the day runs smoothly and literally try to have every little detail accounted for! I do have to say, the day runs smoothly because the whole board of Prelude has been working on it consistently for 6 months before the actual day, and each person is dedicated and holds their own!

STEEZY: Are there any other side projects you are in charge of you would like to give a shout-out to?

Asia: I'm not in charge of anything else except my thesis right now, because lets be real. BUT, shout-out to Main Stacks, Senior Stacks, Tony Calub, the rest of the Prelude Series, all the teams involved with Prelude Norcal, DAMSF, DEEP, and STEEZY! And of course, all the other amazing dance shows (SF Hip Hop Fest, Public Display, Maxt Out, The Bridge, Breakthrough, Collaboration, Urban Paradise, Vibe, Fusion, Ultimate Brawl, WOD, Kenya Dance, Body Rock, ArtOfficial, Urban Street Jam)!!

Asia: I don't know if I am the right person to even begin to try to talk about the differences between the SoCal and NorCal communities, so I'd like to have this disclaimer acknowledging that, haha. When I came to the Bay, there was an obvious discussion of the SoCal-NorCal dichotomy, and it typically went that SoCal teams were 'better'. I can speculate that this is largely influenced by the long-held trend of performance artists making their way to Los Angeles to make it big - there are WAY more agents in LA - and therefore, bigger names in the dance community are concentrated in SoCal.

This opens up a lot more opportunities to learn from experienced dancers via teams, projects, and WORKSHOPS. I hear a lot about SoCal dancers going to everyone's workshops all throughout SoCal all the time, and that is a HUGE reason as to why the dancers improve and grow together as a whole at a high caliber. I do think that within the last few years, though, with the development of dancer-friendly social media such as concept videos and YouTube stars, the Trance app, TV shows, sites that post cool trendy things like Reddit, and now, websites dedicated to our community like Steezy, it seems as though BOTH NorCal and SoCal are getting a lot of recognition. And I do have to say that the NorCal talent is starting to get the attention it truly deserves. The talent, the appetite and drive, the passion, the dedication has ALWAYS been here in NorCal. I mean, the talent tends to move to LA, but where does it come from? Everywhere!

I personally grew up in SoCal, but my heart stays with the Bay because I really dig the innovation and the sense of underdog hunger that sprouts humble, amazing dancers and teams with their own unique styles. I don't think there is a specific "NorCal" style, like there is a "SoCal" or "SD" style.

I feel like our community here is growing stronger and stronger, and Prelude has become a way for Main Stacks to honor and give back to that community and hopefully, to add to its stability. We do roadshow workshops before Prelude to tour around the Bay and get everyone dancing together, so there is more interactions than just the day-of. We have interactive activities and challenges between teams to help spark new bonds.

We've created the "Community Hero" challenge and award to recognize teams that are active within their communities. We like to make tons of corny and funny motivational posters for every team, and assign runners who will be available to the teams at every beck and call, so that the teams are less stressed out, and feel fully supported. Prelude is for them, not Stacks. We're the hosts, and as such, aim to be as welcoming and hospitable as possible to our dance family. Without everyone else, who would we be, and where would we be?

Over the past couple of years, more NorCal teams are going to SoCal as well as all over California and vice versa, to perform at different shows including Prelude, and I think that's really beautiful. I think to the rest of the world, California as a whole is a dance destination, so we should internalize that there shouldn't be a divide. We are Californians, not just 'Socalians' or 'Norcalians'. West coast, best coast. We in this thang together.

STEEZY: Is there anything else you would like to add before we wrap up?

Asia: I know I'm the voice answering these questions for Prelude NorCal, but I really want to stress that I am just a piece of the puzzle. There are so many pieces of this great puzzle, and all of them are vital to completing the whole picture. We're also always looking for ways to get more people involved with Prelude, so if you're interested in partnering or becoming a sponsor for Prelude Norcal, let us know!

To become a Prelude NorCal sponsor, click here, or e-mail norcal.prelude@gmail.com! If you want to catch the $15 pre-sale tickets for Prelude NorCal, click here to purchase them. Dance competitions and events like Prelude NorCal always remind us of how much we LOVE to perform and dance. But did you know there was a psychological reasoning behind that?

Tags:
dance competitions
dance industry
Sharing is caring.
Copied to clipboard
You're in.
Try that again...