What You Should Know Before Going To A Freestyle Jam

What You Should Know Before Going To A Freestyle Jam 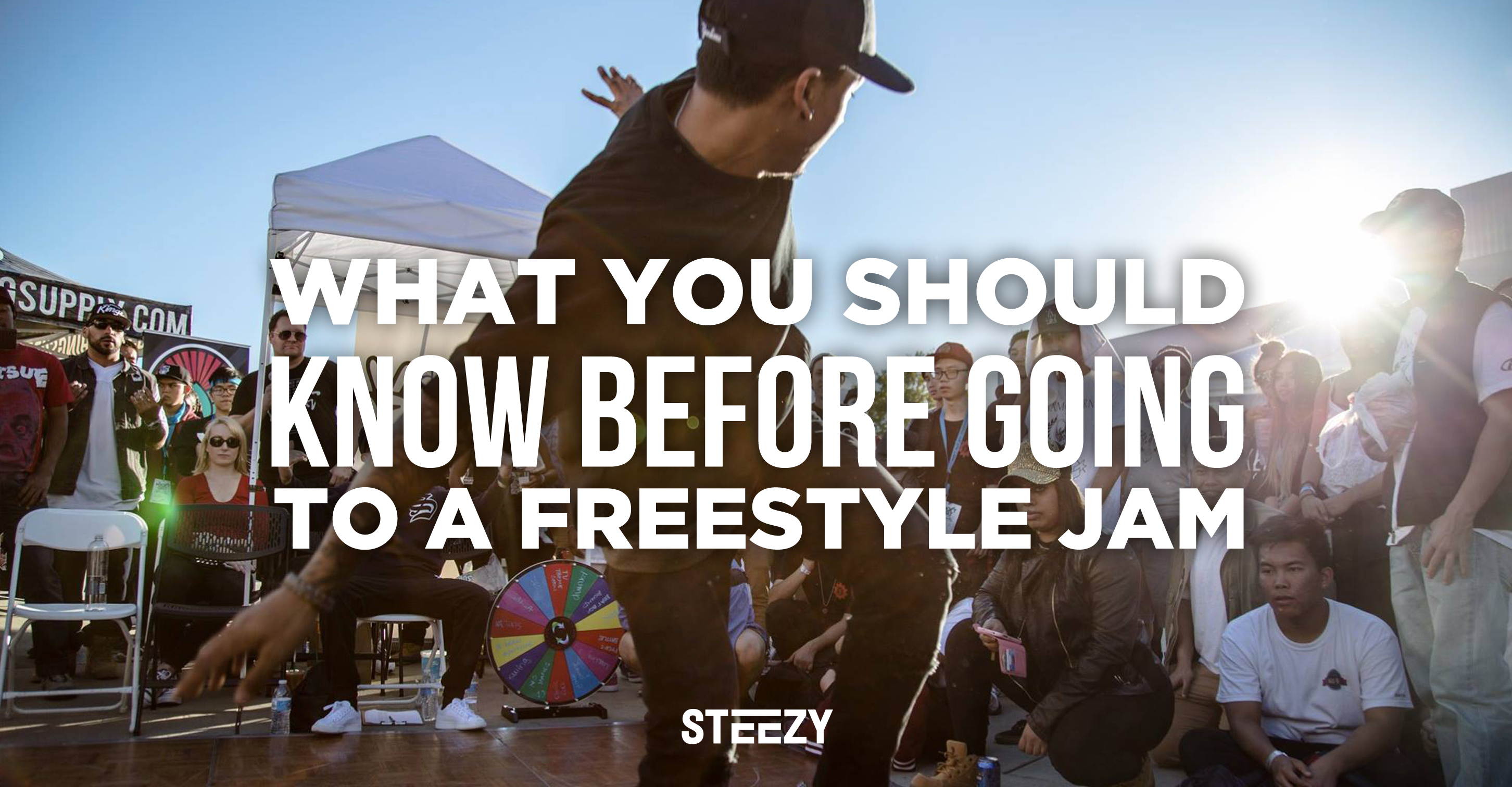 You’ve seen You Got Served. You know the hype we’re talking about. Two people goin’ at it on the dance floor, constantly trying to one-up the other.

The air is thick with anticipation. The crowd grows wilder and wilder. Oof. Chills.

You may dance primarily through taking classes or being on a team, but the history of our urban dance culture is still rooted in street dance!

This scene of a battle is not so removed from the “choreo” scene as you may think.

(Our freestyler friend Ben Lee, AKA “Smoke,” wrote about this relationship in “The Fundamental Difference In Attitudes Between The Freestyle And Choreography Communities.”)

If you’re interested in learning more about the street dance scene, then go to a freestyle jam! Freestyle jams are a tournament of dance battles.

Movies kind of portray what it’s like to witness a freestyle battle, but they’re nothing like experiencing one in real life.

And you can watch a series of battles at a jam. Whoa.

Not only will you get an authentic taste of battling, but you will also be introduced to the community of freestyle dancers who keep the culture alive.

Want your first freestyle jam to be awesome and know what’s going on? With Ben’s help, here’s what you should know.

In the 70’s, individuals started to battle each other because dancing was a way for them to blow off steam, prove themselves, or be accepted as members of crews in the community.

Instead of resorting to violence and gangs, dancers had a way to sort through issues with other groups without being physically attacked.

It was a system based on skill and respect rather than brutality.

Battle culture exploded on the scene during the 70’s and 80’s in America.

Movies like Beat Street, Wild Style, and Breakin’ played a big role in exposing the street dance and battle culture to the general public.

When you think of other types of dance (like ballet or belly dance), there’s no component of battling face to face with someone else.

But when you think of street dance, your mind intuitively think of battling. Later, movies like You Got Served and Stomp The Yard reinforced this image.

As produced as they are, these movies shined a spotlight on the dance world.

Audiences and movie studios are naturally drawn to the classic story arc embedded in dance battles. The conflict, the resolution, and the victor who became a hero.

The Structures Of Battles

The rounds in a freestyle jam are organized with brackets, tournament-style.

The tournament has limited spaces, so if too many dancers register, there is a preliminary round.

This is where each dancer will freestyle in front of the judges, who choose the top 16 there.

From the prelims, the dancers (or groups of dancers) will take turns dancing in “rounds” of the battle.

This is usually around 30 seconds to a minute on the floor for each dancer.

After each of the dancers take their turn, the judges will decide on a winner (usually indicated by pointing / gesturing at the dancer they thought deserved to win the round).

The winner advances up the brackets to battle another winner from a different round.

Freestyle jams are getting more creative with how they seed battles.

Especially ones (like in Europe or Asia) where there are thousands of participants, it is inefficient to use the traditional structures for battling.

For example, there are battles where the participants are split into groups, and a judge runs their own prelim round for that group.

The dancers who make it past the prelims from each of those groups will go on to the battle with the rest of the winners.

2v2, 3v3, 4v4… (and so on) refers to the number of people in each crew. In these battles, the crew members each have a turn in each round of the battle.

Judging is done a bit differently for team battles.

In 1v1 battles, the emphasis is on your individual skill and style.

In 2v2 and on, judges look for all this plus chemistry. They ask themselves, “Are they able to dance together? Did they come prepared as a unit? Are they having fun?”

You may also see battles in specific styles (such as a “1v1 Locking” or “2v2 Popping”). And there are “All-Styles” and “Open Styles” battles.

The battles in specific styles are judged based on the dancer’s mastery within that style.

In an All-Styles battle, judges look for a dancer’s exhibition of at least 2 styles, as well as their ability to transition between those styles within their round.

What You Should (And Shouldn’t) Do At A Freestyle Battle

Will it be your first time attending a freestyle jam? Here are some useful tips on how to make the most of your experience!

You will be blown away by the talent, creativity, and personalities at a freestyle jam.

While you definitely should watch and appreciate, staring creates a barrier between you and the community, closing off the connection that could happen if you were more casual.

“By being in that space, you’re already a part of that community.”– Ben

Just be comfortable! We’re all fans and friends.

The energy at a jam is everything. And giving props is the easiest ways to raise the vibe of the room.

“If you don’t cheer, you’re actually lowering the vibe of the room because you are contributing to the silence.”

So when you see something you like, show it! Do that hand shaky thing, “WOO!,” call out a name, moan... whatever way you prefer to give props.

“As dancers, we’re trained to cheer for other dancers. It’s an act of acknowledgement and of celebration.”

As in any community, the freestyle community experiences a constant influx of young talent – as well as the refinement of old talent.

All this talent, your own included, should humble you.

The biggest reason freestyle battlers have been able to grow so much is because everyone knows to stay on their game.

No matter what path they took, every single dancer has lost several times. And it’s understood that anyone who has become beastly really worked to get there.

There are no shortcuts in freestyle.

“Be humbled from the get go. Your humility should be apparent.”

4. Listen to the music

“If you don’t listen to the music, then you’ll never understand the culture.”

Jams are all about the collective energy in the space and the energy is set by the music.

“The aim is to reach a state of elevated consciousness. Battling unlocks a part of your brain that unites you with another. Dancing creates a message that resounds in you, in the person you’re battling, and in anyone watching. By doing so, we’re sending out the message that you don’t need violence to solve conflict. It’s in the togetherness that we figure it out.”

So be there. Be present. Be with. It all starts with something as simple as listening to the music.

5. Listen to the Emcee

The emcee is there to unite everyone at the jam.

Don’t ignore them or try to talk over them. They’re trying to get everyone to do something together – which is the exact point of the battle.

By being unified in thought and action, the event becomes a movement.

So help them help you have a good time. Being unruly at a jam is disrespectful to everyone there.

Listen to the emcee, vibe with the rest of the crowd, and become a part of the movement!

These are a few notes to keep in mind, but the most important thing for you to do is to just have fun and appreciate the energy around you!

“The essence of battling is that no matter what issue you’re dealing with, even if it seems like one with another person, you will always find the answer within yourself. The external is just a way to visualize and express it.Although battling can be seen as a release of aggression, it’s because we never want to be aggressive. Dance is a way people transcend through their struggles, not going above or around it. It’s about appreciating those experiences and making something good from going through it.”

This individual strength becomes a collective strength. And the strength of the community is what attracts dancers all over the world to freestyle dance.

The dance community opens its doors for anyone willing to step in.

We hope this helped you in your first steps at a freestyle jam! Huge shoutout to Ben “Smoke” Lee for helping us write this article!

‍Need some new moves and inspiration to add to your freestyle?

Take some classes on STEEZY Studio. Sign up today to start your training!