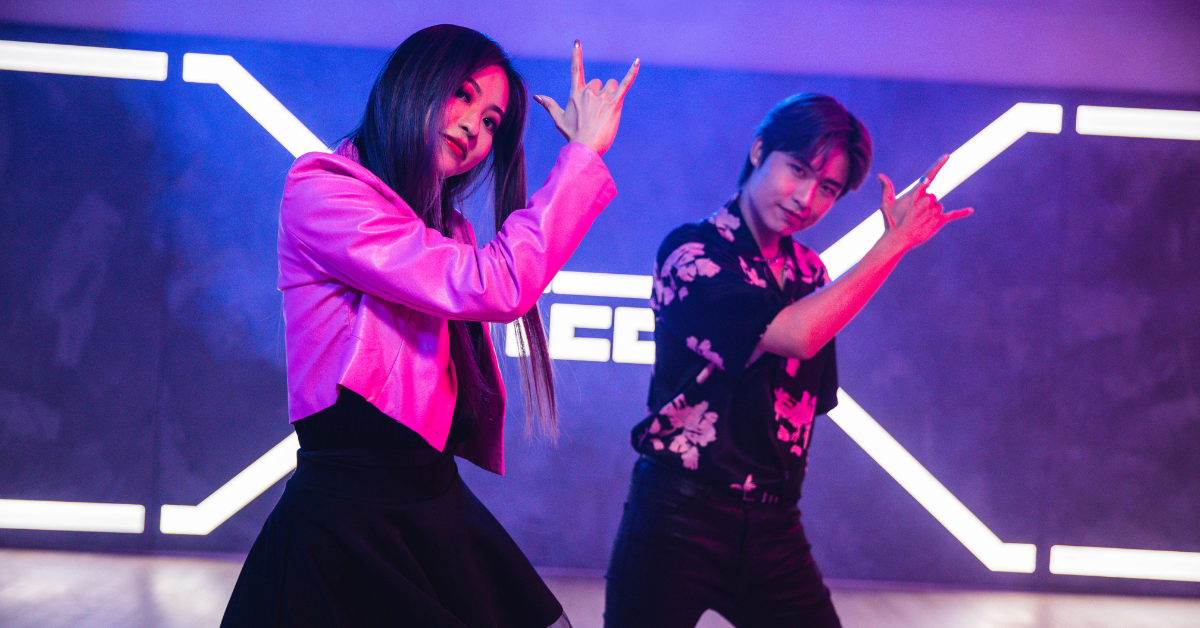 If you find yourself boppin’ your head and tappin’ your feet to the latest K-Pop song, you’re definitely not alone. The genre has taken off and taken over! Today, there are more than 300 K-Pop groups in existence and an estimated 99 million fans from around the globe!

Top K-Pop groups can earn up to (and over!) $100 million, and it’s easy to see why. Between the fashion, the catchy beats, and that killer K-Pop dance choreo, they’ve earned it. But which groups are THE best…and WHY?! We’re about to break it down.

K-Pop Choreo: Learn the 10 most iconic K-Pop moves of the decade

Unless you’ve been living under a really heavy rock, you’ve heard of BTS! But what’s so great about the group? First things first. BTS, an acronym for the Korean expression Bangtan Sonyeondan, literally translates to Bulletproof Boy Scouts. And bulletproof they are!

What makes BTS one of the greatest K-Pop groups of all time?

In 2020, their song “Dynamite” was nominated for a Grammy in the Best Pop Group Performance category. While they didn’t win, they did become the first Korean group to perform at the award show.

These days, the group has hit so many records — from Most Viewed YouTube Video in 24 Hours to Most Twitter Engagements — that they earned a spot in the Guinness Book World Records Hall of Fame in 2022!

We’re almost done here, but just one last thing. According to research completed by Hyundai Research Institute, one in three tourists visiting South Korea stated their only reason for visiting the country was BTS! 😀

Check it: Learn to dance to Butter by BTS now.

What’s a fun fact about BTS?

Get this. BTS was the very first K-Pop group to get a personalized Twitter emoji in 2016. The bulletproof vest emoji was created to see where most of their fans were located. Since then, they’ve had additional personalized emojis.💣

Superstardom: When did BTS blow up?

The group was signed by Big Hit Entertainment in 2013 but really started to gain popularity the following year. Their first number-one hit was “Blood, Sweat, & Tears,” which was released in 2016 and sold more than 1.5 million copies in South Korea alone. This super group hasn’t slowed down since.

While BTS was originally signed by Big Hit Entertainment, the company underwent a rebranding in 2021 and is now called HYBE. HYBE is also responsible for artists like Seventeen, Bumzu, and Nana.

Cash money: How much is BTS worth?

Easily the richest K-Pop group of all time, it’s estimated that BTS is worth more than $150 million!💰💰

Girls’ Generation, dubbed “The Nation’s Girls Group” in their home country of South Korea, is indisputably one of the greatest K-Pop groups of all time. With hits like, “I Got a Boy,” “Mr. Taxi,” and “Oh!,” Girls’ Generation has accumulated fans throughout South Korea, Japan, the United States, and beyond!

What makes Girls’ Generation one of the greatest K-Pop groups of all time?

In 2017, Girls' Generation was honored by Billboard as the “Top K-Pop Girl Group of the Past Decade.” If that’s not enough to rank them up there with the greatest of all time, what is? Well, there’s plenty more.

Prior to that, in 2011, the group released their first album in the USA. It was a major hit, and Girls’ Generation became the first Korean stars to end up on mainstream American television shows. They made appearances on “Live! With Kelly” and the “Late Show With David Letterman.”

As if that’s not enough, Girls’ Generation also became the first non-Japanese girl group to have three number-one albums on the Oricon Albums Chart. They broke records with their Japanese concert tours with a whopping 550,000 people in attendance.

They also went down in history for winning a Daesang award three times in a row — first girl group to do so!  🔥

The group hated their name when they first heard it! Can you believe it?

Superstardom: When did Girls’ Generation blow up?

Girls’ Generation originally rose to stardom in 2009 with their debut mini-album, “Gee.” The title track rose to the top spot on KBS’s Music Bank and held that spot for NINE weeks straight.

Ready to K-Pop ‘til you drop? Thought so. Learn to dance to Girls’ Generation hit song, Gee!

Cash money: How much is Girls’ Generation worth?

It is estimated they made $900 million in their time together. The group has been on indefinite hiatus since 2020 so members can pursue solo opportunities. No doubt the cash is still flowin’.

They might be considered second-generation K-Pop, but they're still number one among many K-Pop lovers. Widely known as SJ, SuJu, and “King of Hallyu Wave," the group has changed a lot over the years, but their popularity hasn’t wavered.

While they originally started as a group of 12, the boys had several members come and go over the years.

What makes Super Junior one of the greatest K-Pop groups of all time?

Regardless of the comings and goings, the music never stops, and the fandom never fades. They’ve been going strong for 15+ years. That’s a LONG time. 🤯

Super Junior took home both the Choice International Artist and Choice Fandom awards at the 2015 Teen Choice Awards. Clearly, they had a worldwide fan base early on.

Need more proof? Super Junior was also the best-selling K-Pop artist FOUR years in a row! That’s no accident. Top songs like “Superman,” “It’s You,” and “A-Cha” will have you dancing for days.

And they shook things up even more with their recent release of “Lo Siento,” a tri-lingual collaboration with Play-n-Skillz and Leslie Grace. The track was the first K-Pop song to ever appear on a Latin Billboard chart. What?!?

What’s a fun fact about Super Junior that not everyone knows?

If you’re new to K-Pop, you gotta know that the group’s fan army is called ELF, short for Everlasting Friends. Don’t mess with the ELFs.

Superstardom: When did Super Junior blow up?

Super Junior really hit it big in 2009 with the release of their best-selling single, “Sorry, Sorry.” They had the entire country of South Korea dancing to the song. With its catchy sound and simple choreo, the dance moves from “Sorry, Sorry” were performed on talent shows and even in parodies all over the country.

Catch the choreo! Learn some moves to “Sorry, Sorry” now.

Lee Soo-man, the founder of SM Entertainment, is responsible for helping the group rise to superstardom as one of the greatest K-Pop groups of all time. The management company also divided Super Junior into smaller groups to target different audiences — and it was a hit. That trend has since continued among other K-Pop groups.

Cash money: How much is Super Junior worth?

Thanks to ELFs, it’s estimated that Super Junior’s net worth is somewhere around $766K.

The four-member girl group, BLACKPINK, made their debut, “Square One,” in 2016 and their popularity skyrocketed quite quickly. Jisoo, Jennie, Rosé, and Lisa are loved around the world for their upbeat sounds, fun-loving presence, unique fashion sense, and HOT K-Pop dance moves.

What makes BLACKPINK one of the greatest groups of all time?

BLACKPINK wasted no time taking over the charts. They took home the Rookie Singer Award at the Asian Artist Awards in 2016. The following year, the group earned themselves the Style Icon Award at the Busan One Asia Festival.

Their song, “As If It’s Your Last,” was featured in the movie Justice League, and the video hit more than 200 million views 😳 on YouTube in no time. In fact, the music video had so many views that it was ranked the number one most-loved K-Pop video in the world by YouTube.

In 2018, the group scored their own reality show titled, “BLACKPINK House.” Fans loved it and the 12 episodes have reached upwards of 400 million views total on YouTube.

They were selected as the 2020 Hitmakers Group of the Year by Variety, and just in case you need another reason, they also won Best Female Group that year at the 2020 Mnet Asian Music Awards.

And finally, group members also have wildly successful solo careers — earning additional awards, performing at top events around the world, and serving as models for some of the best-known brands in Asia.

Dance Break: Learn how to do the dance move from BLACKPINK’s, “DDU-DU DDU-DU”

What’s a fun fact about BLACKPINK that not everyone knows?

The group members can all speak two languages fluently — Korean and Japanese. However, each one grew up in a different country! While Jisoo grew up in South Korea, Jennie spent her childhood in New Zealand, Lisa was raised in Thailand, and Rosé called Australia home.

Superstardom: When did BLACKPINK blow up?

Um…from the day they started? In all seriousness, it didn’t take BLACKPINK long to become popular. The release of their debut single album, “Square One,” kicked everything into motion. That release included the song, “Boombayah,” which hit the top of Billboard’s World Digital Song Sales chart within its first few weeks. On that same album, “Whistle” reached the top of the Gaon Digital Chart.

The group is managed by YG Entertainment, which is also responsible for 2NE1. When 2NE1 disbanded in 2016, BLACKPINK came on the radar with a whole new sound.

Cash money: How much is BLACKPINK worth?

It’s estimated that the group earns around $32 million per year.

Whew! On a scale of 1-10, how ready are you to bust out some new K-Pop moves yourself? Don’t worry. It’s only natural. Pick your favorite group and get to it on STEEZY.