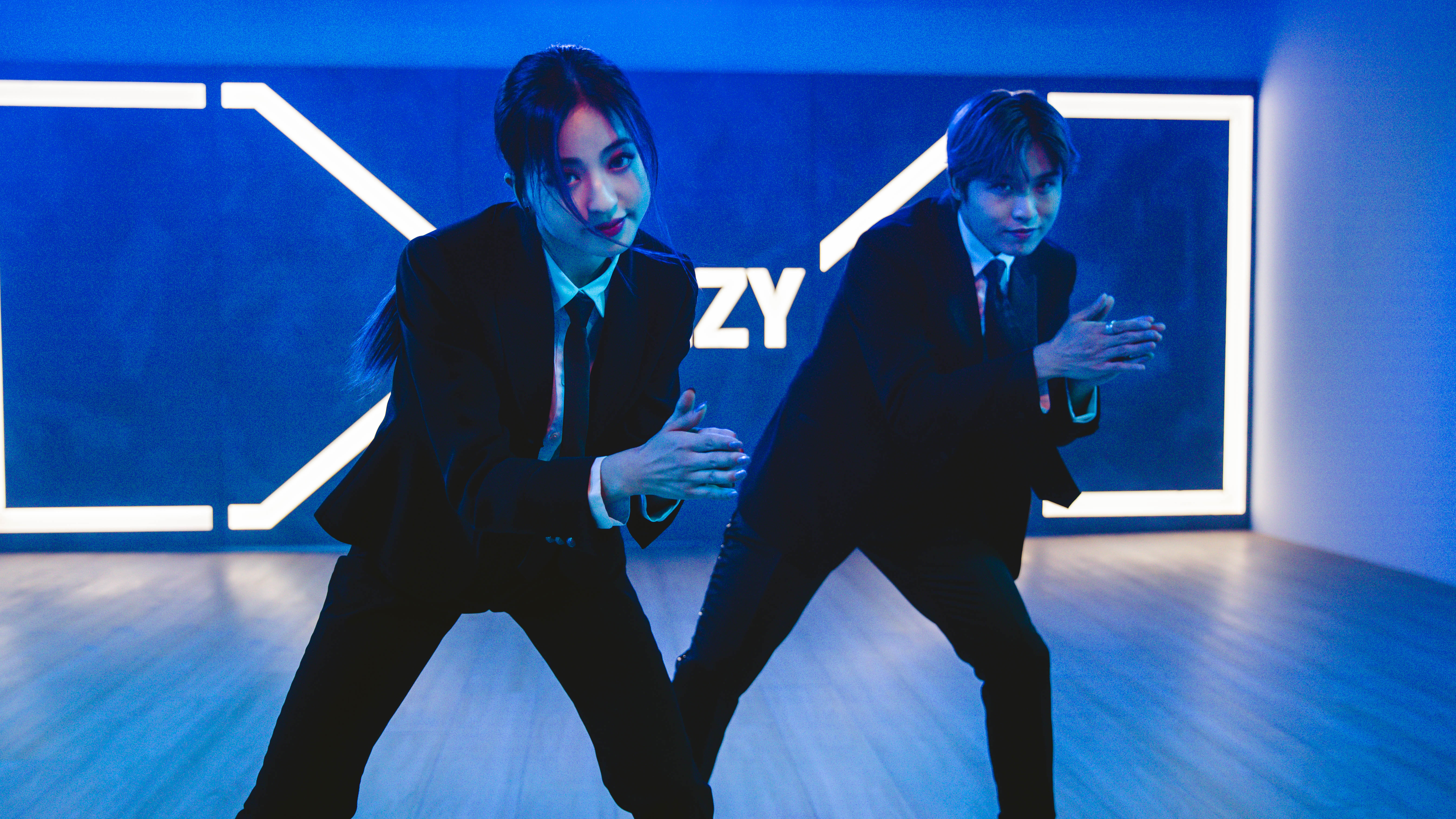 So, if you’re anything like me, you love a good K-Pop song and the fun, popular choreography that comes with it.

But I have to admit… if you asked me if I’ve ever actually tried learning any K-Pop choreography… I’d embarrassingly have to say “No”.

Even though the dances are meant to be simple to learn, it’s easy to feel intimidated when you’re watching the moves being executed by idols who’ve been training for most of their lives!

So, I decided to find out what it takes to master K-Pop routines AND perform like a legit K-Pop star.

Now, I’m gonna share everything I learned with you.

Keep reading to get all the tips you’ll need to become a K-Pop dancer yourself!‍

The term “K-Pop” is an abbreviation for “Korean popular music.”

While the name is pretty general, “K-Pop” is typically used to describe a mixture of East Asian and Western music genres that can be traced back to the 1880s.

Throughout the 1880s-1940s, Koreans were introduced to Western music through American missionaries and radio broadcasts, but it wasn’t until the 1940s when North and South Korea parted ways that K-Pop music really started to thrive.

As a result, South Korean music artists started infusing their own music with Western rhythms, instruments, vocalization styles, and languages.

And sure enough, Korean singers started getting their big break within Western circles.

Ever heard of The Kim Sisters?

Around 1959, they were the first Korean artists to drop an album in the U.S!

Of course, this music doesn’t sound like K-Pop as we now know it…

The music we currently call “K-Pop” is most heavily influenced by Western music from the 1990s-2010s.

It was during that time period that the internet made it easier than ever for countries to share music with each other.

The Korean government was putting more focus on marketing their music to other countries, but it wasn’t just the K-Pop industry running the show anymore!

Despite the fact that they scored really low during a televised Korean talent show with their song Nan Arayo, their fans went crazy over that same song AND their album.

They posted their music video online and the song made it to the states where new audiences fell in love with it!

Whether it was Seo Taiji & Boys’ unique fusion of Rap, Hip Hop, Rock, Jazz, and EDM, the sound of the Korean lyrics, or their standout fashion sense, thousands of teens and tweens around the world saw their video and looked at them as “idols” – a term that would become the #1 descriptor for K-Pop group members.

WHAT IS K-POP DANCE?

Of course, one of the main things that sets K-Pop apart is the dancing!

The choreography is full of fun dance moves that are actually easy to learn.

And since the late 2000’s, K-Pop choreography (and the highly produced music videos that showcased it) has heavily contributed to the genre’s virality.

The choreography that went with the chorus of each song was meant to be catchy and attainable, so that anyone in the world could “cover” the choreography just like they would cover the song itself.

The moves and combos were heavily influenced by the Hip-Hop-heavy choreography used by 90s/2000s American groups, but K-Pop dances also tended to lean very cute/playful or very edgy – much like the music itself.

They’re both filled with sharp and precise movements, hyper-feminine grooves, and playful gestures. And it's not just one person dancing. You get to see lots of bodies moving in unison!

Many of the early K-Pop groups who were popular in the states followed this formula, but the first modern K-Pop song to get serious radio play featured unisex moves that were appropriate for any age.

Due to that “galloping horse” move, this was the first video on YT to receive over a billion views.

HOW TO LEARN K-POP DANCES

If you want to learn how to dance K-Pop, start by choosing a few groups that you really resonate with!

Then, you can dissect what makes their choreography unique and master their style!

For example, if you really love BLACKPINK’s Lisa, you might notice that she’s all about intricate details and putting serious power into her stage performances.

So, as you’re learning a BLACKPINK or Lisa routine, really focus on those style elements as you practice each move.

Be thoughtful about flicking your wrist to finish a move or tilting your head at a particular moment.

Remember to stay powerfully grounded when you strut, rather than bouncing lightly on your feet.

Once you know which idol you want to look like, you can then focus on mastering the actual dance steps.

If you’re totally new to dance, start by looking for choreography that’s a little more smooth and groovy.

Basically, you want to look for the same types of moves that you’d do at a club or party.

A great example would be the routine from “Pretty Savage” by BLACKPINK.

The chorus section is all about hair whips, booty shaking, and bouncy moves that hit right on the beat. Even if you don’t look exactly like the idols when you do this routine, you’ll still look great!

P.S. If you wanna learn this choreography step-by-step, we have a tutorial on STEEZY Studio. ;)

If you’re further along in your dance training, then you can choose a faster, more precise routine.

Typically, these types of choreographies will test your ability to use speed and control at the right time - all while dancing to more complex rhythms.

During the chorus section, you’ll notice that there's a lot of jumping, quick hand movements, and sudden transitions from fast moves to slow moves.

You’ll need to practice this routine a lot since many of the moves won’t come naturally to you!

P.P.S. You can learn “Say My Name” on STEEZY Studio too! Just click here.

After you know the style of choreography and routine you want to learn, you’re ready to really dive in!

There are a few ways to go about learning K-Pop choreography.

A lot of people learn the routines by studying the highly produced music videos that come with most K-Pop songs.

You can find the videos on YouTube, slow down the tempo, study the movements, and then practice in a mirror at home.

Many other K-Pop songs come with what’s called a “practice video” – basically, this is a video of the music group rehearsing the routine in a clean, simple environment.

These videos are much easier to learn from since they don’t include all of the fancy cuts/editing that can make it harder to see what the idols are doing.

Here’s an example of BTS practicing their routine for “Fire”:

Of course, when you’re learning a K-Pop routine, you’re not limited to just videos from the music groups themselves.

There are also tons of K-Pop covers artists on YouTube who break down the routines into step-by-step tutorials.

One of the most popular cover artist duos, Ellen & Brian, has nearly 3M followers!

Now, while all of these YouTube options are useful, they definitely come with some learning limitations.

You’ll likely spend a lot of time pausing and rewinding, stopping to check yourself in a mirror, and digging for videos where the content is flipped on screen so that you can copy the instructor directly (basically, if they lift their left arm on screen, you wanna be able to  lift your left arm too. You don’t wanna have to think in your head, “ok, her left arm is going up, but the camera is reversing the image, so I should lift my right arm, right???”).

Luckily, all of these annoying issues are solved for you on STEEZY Studio!

Unlike YouTube, STEEZY’s a platform made for learning dance routines.

You can flip the video’s orientation with the tap of a button, play tricky sections of the routine on loop while you practice, and use your webcam as a virtual, on-screen mirror so you can see yourself right behind the instructor.

We’re regularly dropping the latest and greatest K-Pop tutorials so definitely check it out here!

And if you’d like to try STEEZY out for free, start with these 10 FREE K-Pop moves classes.

One last tip before you dive into allll the K-Pop routines!

It’s important to keep in mind that K-Pop choreography doesn’t exist in a vacuum.

Choreographers from all over the world put together the routines for your favorite groups, and those choreographers have unique styles and dance backgrounds that are worth learning about!

For example, if a certain choreographer regularly creates routines for your favorite group, and that choreographer is a big fan of Jazz dance steps and lots of hair movements, it might be worth it to take their classes directly so that you can perfect those skills.

Here are a few K-Pop choreographers who you can train with on STEEZY:

Choreographer Brian Puspos is known for working with BTS and being one of Jimin’s favorite dancers.

All of these K-Pop choreographers and many more (Ian Eastwood, Lyle Beniga, Ellen Kim…) have classes on STEEZY Studio that will teach you how to dance smooth, sharp, fast, slow – everything!

Planning to make your own K-Pop dance cover video?

Now that we know what K-Pop is and how to do K-Pop dances, the last step is learning how to look the part!

1. Wear a mix of fitted clothing pieces like skinny jeans and tight tops, combined with clothing that’s loose and baggy. The fitted clothes will show the lines of your body as they cut through the air while the baggy pieces will add more motion to each of your movements. Leggings or shorts with a loose buttoned-up shirt or a skirt with bike shorts underneath are great options. Use the music videos for inspiration.

2. Have fun with your hair – it’s often part of the choreography! You can search “k-pop hair ideas” on Pinterest to come up with fun ways to style ponytails, pigtails, and braids that will complement your outfit.

3. Set up the “set” you’re going to dance in front of! You don’t need to do something super fancy like the music videos themselves – mainly focus on creating a set that’s visually interesting without being distracting. If you want a city skyline in your background, you can dance on the high floor of a parking garage. You can use brightly colored walls in your town as a backdrop. You can throw some string lights behind you in your bedroom or make use of a color changing bulb. Just make sure there isn’t any clutter in your space!

Now, who’s ready to learn some K-Pop moves?
Head over to STEEZY Studio and immerse yourself in the K-Pop world y’all!

Related article: 4 of the All Time Greatest K-Pop Groups Everyone Should Know

Tags:
k-pop
learn dance at home
dance covers
Sharing is caring.
Copied to clipboard
You're in.
Try that again...