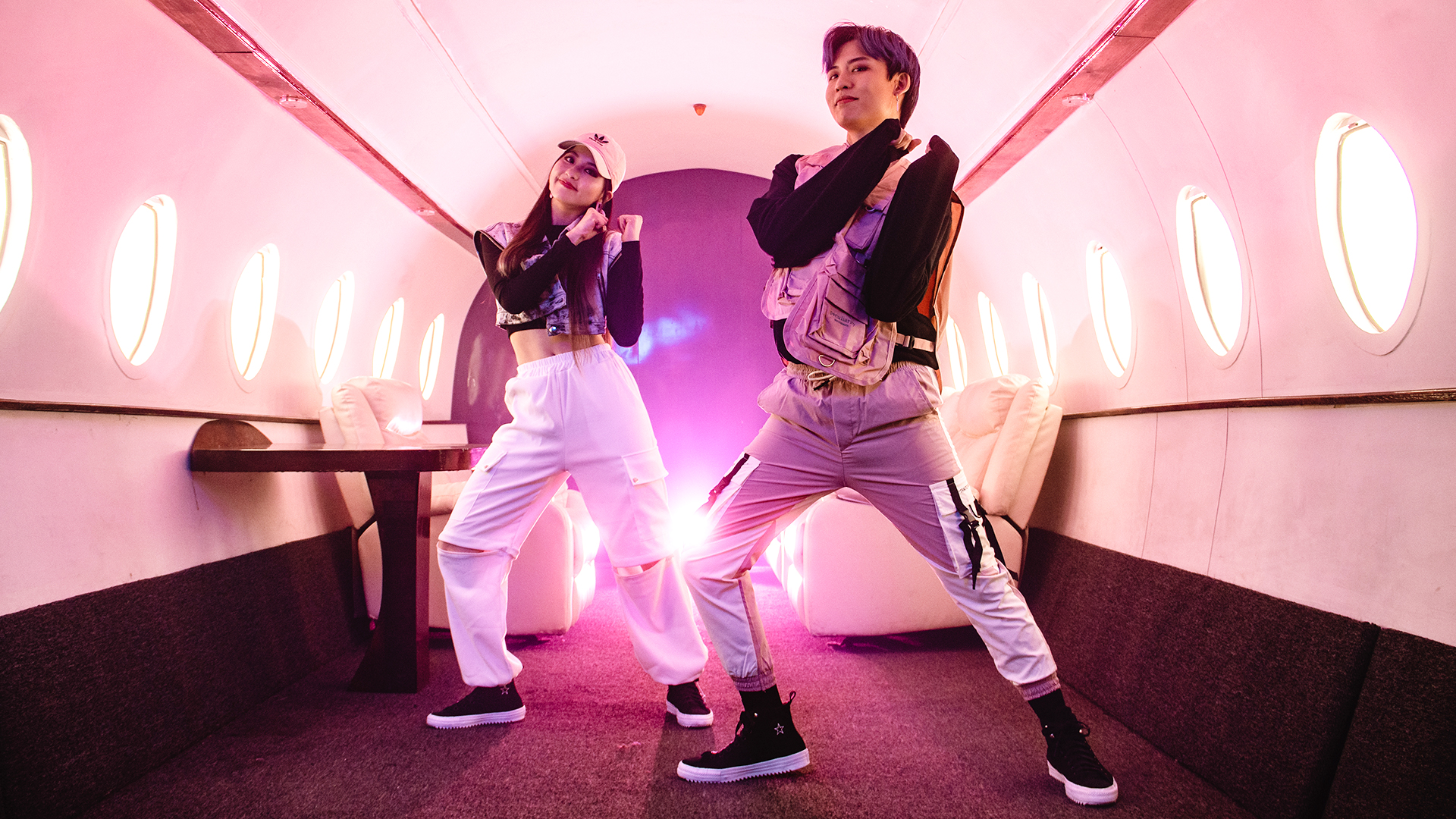 With YouTube making music videos accessible to anyone, anywhere, the K-Pop music scene has seen an EXPLOSION in popularity in the last several years.

And the most popular music videos? They feature much more than music.

It’s the eye-catching choreography including fun, wordplay-based moves, cleanly synchronized steps, and stage-ready poses and facials that has led to K-Pop Music Videos (or MVs) gaining millions of views.

In these videos, skilled dancers break down the exact moves seen in the latest K-Pop MVs and teach the steps to the masses.

Today, two of the most popular K-Pop cover artists on YouTube are Ellen & Brian – a couple  credited with teaching millions of dancers around the world the exact choreography to 100+ iconic K-Pop songs.

We're so excited to announce that this talented dance duo is now bringing their K-pop expertise to STEEZY Studio, where dancers can learn the routines faster and better with our intuitive video tools!

We caught up with Ellen & Brian to learn about how K-Pop Dance Covers became an integral part of today’s dance culture, and how you can learn to dance just like the idols themselves!

What are your dance backgrounds?

Ellen: I started dancing by taking ballet classes when I was 7 years old. When I was in middle school, I found interest and started training in many other styles such as hip hop, jazz, and K-pop. Since then, I joined my high school dance team, college dance team (ACA at UCLA), and also continued to learn many K-pop dance classes.

Brian: I started dancing in freshman year of high school (when I was around 14) and started learning popping by watching videos online! I loved watching popping battles and was mainly interested in freestyling. After I joined the school’s dance team, I learned more styles such as hip hop, contemporary and jazz. I then started doing more choreography based routines in college.

What drew you to K-Pop as a genre/style?

The catchy melody and viral point moves drew us into K-pop in the first place. We love how there is a huge variety of genres and styles portrayed within K-pop music and choreography. It's just always so fun to sing and dance along with the K-pop songs!

Why do you think K-Pop music has BLOWN UP in the last decade?

With social media and everything getting bigger, there are more chances for the world to see things they have never seen before. Aside from music and lyrics, K-pop performances bring something artistically unique and that's probably a big reason why so many people are drawn to it.  K-pop stage performances usually put a big emphasis not just on the choreography aspect, but also from changing up their outfits, make-up, hair styles, and stage set up every time they perform. It is very refreshing to see how creative and innovative K-pop artists are, and the amount of effort put into the production.

How did the K-Pop Dance Cover culture get started?

K-pop songs have always been known to be very catchy – not just the melody but also the choreography. K-pop places a huge emphasis on all aspects of the performance of each song, which constantly draws people’s attention to the unique, fun, and engaging choreography. Whenever K-pop artists release a new album/song, they typically perform their title track on music/TV shows multiple times a week, with a different costume and stage set-up every time, allowing the audience to be familiarized and fully immersed in their performances even though it is the same song and routine every time.

Since a lot of the iconic moves are easy to follow and very memorable, more and more K-pop fans started learning the dances and made dance covers to the songs they liked. As both the K-pop culture and dance culture have been drastically evolving over the years, K-pop dance covers have also been a hot topic for both people who like to dance to K-pop and those who like to watch dance covers of their favorite songs/artists.

How have you seen K-Pop Dance Cover culture evolve as it spreads across the globe?

K-Pop has definitely become more global over the years. With its increasing popularity comes more content that are more catered towards international fans. For example, some artists might have songs that include more English lyrics, allowing more fans who don’t know Korean to be able to sing along at home, at concerts, or in their dance covers. Many dance cover groups across the globe also like to film their covers at popular landmarks to represent their home country/location so that the viewers can easily identify or remember that specific cover.

It is also a great way of showing the artists that their influence has reached so many fans all over the world. Another interesting thing to point out is the “Random Dance” games that are often hosted (before COVID-19) in a public, open, and large area where a series of K-pop songs (only the chorus parts) are being played one after another. People are encouraged to dance together if they know the choreography to each song. This is a great way for K-pop fans to enjoy and bond with each other over the songs and dances they love, and it is also very impressive to see hundreds of people who probably don’t know each other to be dancing altogether.

What do you think the most popular K-Pop choreos of all time have in common?

A lot of the time, the most popular K-Pop choreographies are linked directly to a catchy part of the song. The “point move” (which is basically the stand out move of the song) is unique and fits well with the vibe of the part of the song. Typically, the title of the song will be sung or sometimes even repeated multiple times during the chorus of the song, which is when the “iconic” move happens. This allows people to easily remember and link the song name to the melody and dance move. A lot of the time, these “iconic moves” involve more movement from the upper body as opposed to the lower body. They are usually short, easy, and also very creative so that this exact move can be associated with this specific song. The most iconic ones can easily be identified via a frozen frame with no music or even just a silhouette cut-out of the move, which shows the power of iconic K-pop moves.

How does the average K-Pop idol train? How can the average dancer train more like an idol?

Since we have never been K-pop trainees before, we cannot give concrete answers and can only make educational guesses on how long they train for. It varies for each person and company but based on our knowledge, a typical K-pop idol can train ranging from a few months to 10+ years with the average being around 3-6 years. K-pop idols not only have to practice dancing, but also need to train in singing, rapping, modeling/acting (if applicable), language lessons, and more. Therefore, a lot of their time is devoted to perfecting the whole package and not just practicing dance.

Singing and dancing at the same time requires a lot of extra practice and technique that the average dancer may not need to worry about. If we are only focusing on the dance training portion, we would definitely recommend to focus on cleanliness and accuracy. Having a thorough understanding of what each move and pathway should look like would really help ensure your own cleanliness. Go through each move slowly until you are comfortable with the speed and happy with all your angles/pathways. Filming yourself, watching yourself, and even comparing with the artists or instructors can help you identify areas that you can work on. Most importantly, the facial expressions, the overall vibe, and stage presence is what brings your performance to the next level. We like to watch the artists’ performance videos over and over again to fully grasp the right feel of each specific song and then practice improving our own facial expressions and charisma on top of the movements. At the end of the day, continue to stay happy, motivated and confident in order to train more effectively and enjoy the whole process! :)

As cover artists, do you try to emulate your favorite idol’s persona when you dance? Or do you bring your own flavor?

We love the fact that each K-pop artist has his or her own persona while still cohesively portraying the overall group concept/style as a whole. When we do dance covers, we try our best to emulate each idol’s style by paying close attention to each person’s facial expressions, body posture, hand gesture, textures, and any details that stand out to us. While we imitate these characteristics, our own style might still show through based on our different dance backgrounds and experiences, which helps us add a personal touch to our covers.

What sets your STEEZY tutorials apart from what your students can learn on YouTube?

In our STEEZY tutorials, we go more in-depth when explaining the moves and in how we interpret what the choreographers (as well as the in-house choreography teams) intend for the original artists to do. We usually look at all the members of the K-pop groups to see how each of them execute the choreography in order to figure out what the final choreography might look like and share our best input on how each move should be executed. Instead of just going over each move, we also like to share more details for each move (like the exact head angle or finger positioning) and give our two cents on how to match the vibe/concept/style better. We sometimes explain different variations as well in the event that the artists themselves have different moves.

Do you have any advice for beginners who are totally new to K-Pop?

Our advice would be to always enjoy the process no matter what! There will always be some moves or routines that are difficult to execute, but the key is to continue practicing and stay positive. K-pop dances have evolved a lot over the years and some new routines are getting more difficult and complicated as the idols themselves have improved in their own technique and dance skills as well. Therefore, it is normal to not look like them who have been practicing the same routine thousands of times. As long as you set your own personal goal and work hard for it, you should be proud of yourself!

Tap below to learn more:

Tags:
k-pop
dance covers
Sharing is caring.
Copied to clipboard
You're in.
Try that again...